The Norwich Theatre Royal annual pantomime is a theatrical event that commands a huge following and has become a benchmark for the genre.  Familiar names appear in the programme year after year for a good reason – they know how to deliver an immensely enjoyable and well presented show.

Pantomime is an uniquely British tradition combining familiar stories with a potent mix of popular current stars, lively songs, slapstick comedy and wonderfully scripted double entendres.  Add in a colourful set and a few topical references and you have a winning formula that fills theatres reliably every Christmas season.

As soon as we take our seats in the Norwich Theatre Royal we know we can expect a treat as the colourful set design greets us.  The bright and colourful Oriental theme continues throughout the show with a myriad of changes of the exuberant costumes matching the powerful colours of the settings.  Even the lighting takes a step up in this Panto, with some dazzling laser lighting. Oh, and watch out for the flying carpet!

First to appear on stage is the Genie of the lamp, played in lively style by Channel 5 favourite Kiera-Nicole Brennan, followed soon by the baddie of our panto, Abanazar, brought to the stage by Emmerdale star Rik Makarem. Rik looks rather hurt when he gets the obligatory boots and hisses, I think he may struggle to be truly evil. The hero Aladdin is another TV favourite, Steven Roberts from Hollyoaks amongst many other TV roles.  Steven brings the fresh-faced charm required of the role and carries a lot of the singing duties in this very musical production.  Aladdin falls for the Princess Willow, not knowing that she is a Princess and he is rather more than first believed. Willow is another rising star, Anna Hannides, who steals our hearts and beguiles Aladdin, the boy who talks to Pandas.  Did I say pandas?  No Theatre Royal Panto would be complete without a cast of the youngest stars, and we have three whole sets of Panto Babes from Central School who are the little pandas who need plenty of attention and catching when they run off.

The plot is set out in this production before we get to the two most important characters, Widow Twankey (Richard Gauntlett, who also scripts and directs this show) and his daft sidekick Wishes Washee (Ben Langley) the hapless crowd pleasing nincompoop who is Twankey’s daughter and Aladdin’s brother.  Ben as ever is peerless at engaging with the audience and making sure this is an interactive show.  My tip: if you are shy, retiring and don’t want to get involved perhaps you should sit at the back of the circle.  Or in the foyer, even. Otherwise, go with it and have a bit of fun!  Probably best not to go wearing an Ipswich football scarf too, the humour is a bit local!

Gauntlett and Langley can be relied upon to offer a carefully executed and very funny slapstick routine.  Previous years have seen them getting soaking wet or covered in flour, they manage to avoid those risks this time but they have an epic struggle with the palace wall which has everyone in fits of laughter.  They know the Norwich audience well and some running gags from previous years always go down well.  Gauntlett is the perfect dame, with prodigious singing and physical comedy talent and spot-on timing.  His costumes are wonderfully over-the-top, with many changes throughout the show. As writer, director and leading ‘lady’ he has a right to be very proud of this great show.

Aladdin is a happy, funny show that takes the venerable panto tradition and brings it bang up to date with lively music, great performances and an adorable set of young pandas running rings around the leading characters.  There is something for everyone in this show which makes a great Christmas outing for all the family.  The Theatre Royal has a tradition of producing great pantos, but this is the best yet. 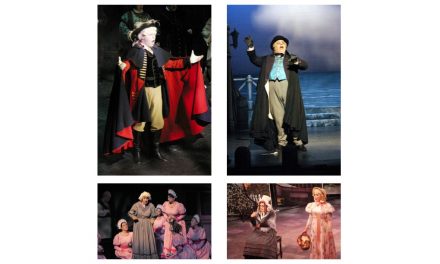 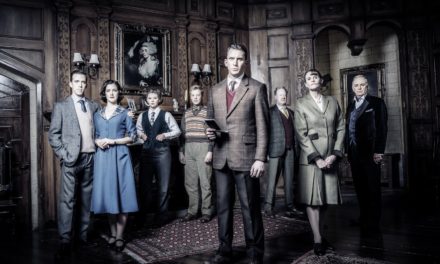 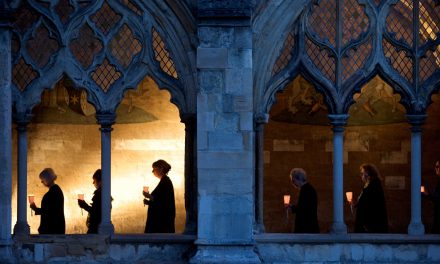