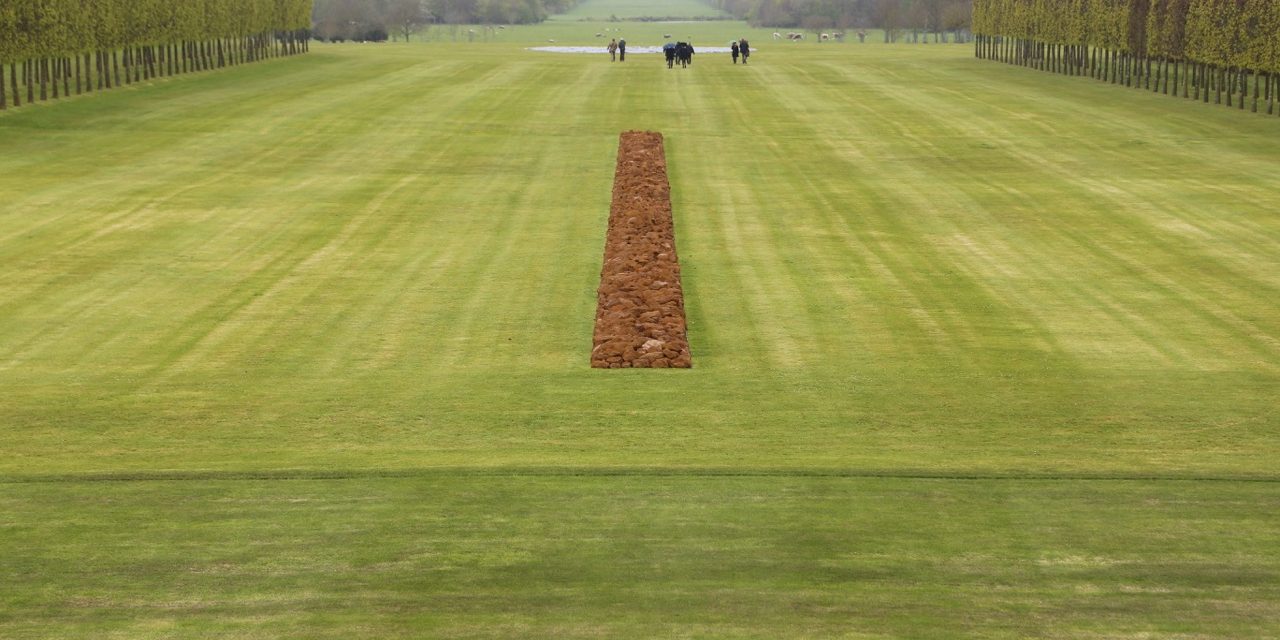 A Line in Norfolk – photos  ©Julian Swainson
New sculptures by Richard Long at Houghton Hall
Houghton Hall is one of those magical settings that seems to confirm the impossible claim that Norfolk has bigger skies than anywhere else. The huge scale manmade landscapes are often enhanced in their formality by the random cloudscapes passing by.
My recent visit was rather different, with a grey overcast sky and light rain throughout. Curiously, the rain was a bonus rather than a burden bringing new depths of light and texture to some of the large scale Richard Long installations within the hall grounds, particularly those made from slate.
Richard Long is one of the most influential figures in the world of conceptual and land art who starts from a deep affinity to our landscapes bringing new techniques to sculptural installation.
Richard also undertakes long walks, often over many days, which he documents with photography and which often include ephemeral spontaneous landscape sculptures. His photographs and accounts of these walks are a significant part of his overall artistic presentation. He is well known for an unusual approach to walking, where he rigidly follows an apparently arbitrary straight line drawn onto a map regardless of the physical challenges along the way, and has walked this way notably across the hostile wilds of Dartmoor, something he is proud of.
At 71 Richard is lean and fit, walking up to 30 miles a day and cycling to keep fit. Seeing him indoors even in the beguiling setting of Houghton Hall he seems anxious to be outside, in the elements and on the move.

There are seven major pieces by Long at Houghton. The oldest, the 2003 Full Moon Circle is a huge circle of carefully placed Cornish slate. Like other work installed at Houghton, notably by James Turrell, this piece can change dramatically to reflect the time of day and the prevailing light, or lack of it. The rain on a grey day turns the slate into a radiant silver, seeming to select more light than is falling on it. Between this and the stunning Palladian Hall is the largest of Long’s new Houghton works, ‘A Line in Norfolk’. This 84-metre long band of radiant ginger carrstone, found locally, seems impossibly intrusive in the immaculate lawn in front of the Hall, yet fits perfectly with the large scale landscape of Houghton Hall grounds. 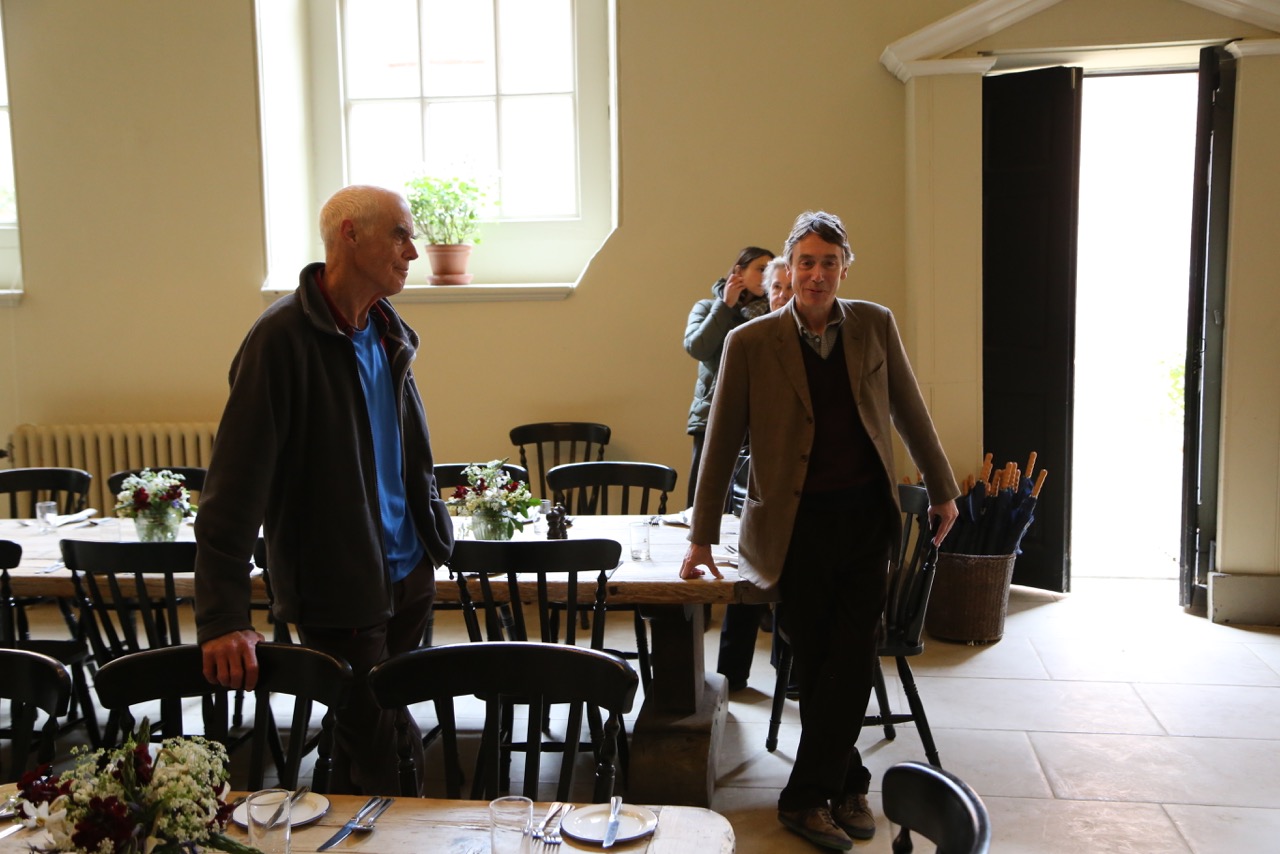 Houghton Hall is the family seat of The Marquess of Cholmondeley, a keen patron contemporary arts. He see Richard Long’s Houghton work as being part of the long held British tradition of the stately home folly, albeit in contemporary style and use of materials. 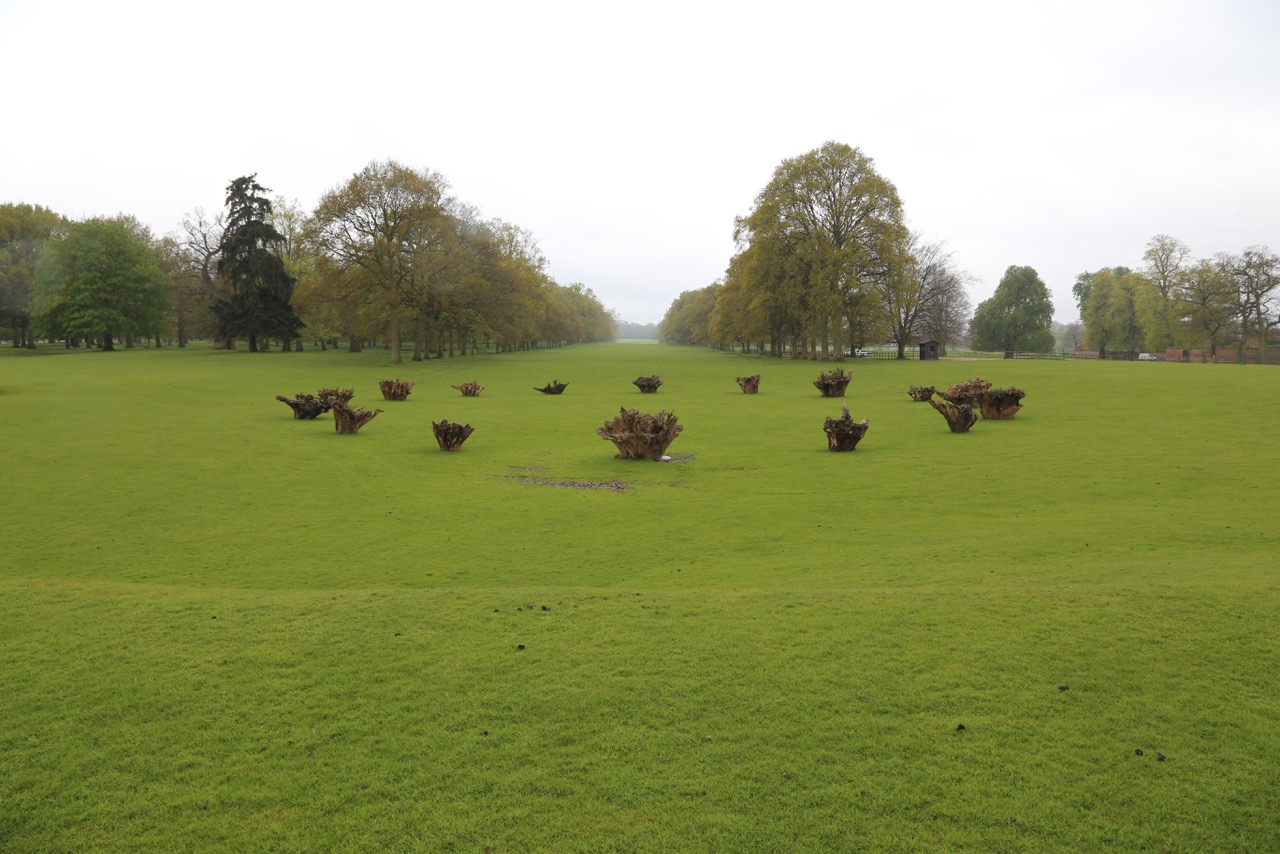 The other Long works include ‘White Deer Circle’ a ‘henge’ of upturned large tree stumps from the Houghton estate forming a large circle marking an area where a previous village settlement had been cleared for the creation to the Houghton Hall grounds. The stumps create bizarre alien shapes that on closer inspection suggest wild heads and eyes.

The previously immaculate croquet lawn within the Walled Garden now hosts the Houghton Cross – a fierce jagged cross of upended large slate fragments. Walking around this installation with teacher Fiona Roberts who is leading an education project at Houghton she said ‘we have to double the adult to pupil ratio to pass the risk assessment for this one’ – an apt comment on this sharp stone intrusion into domestic tidiness. 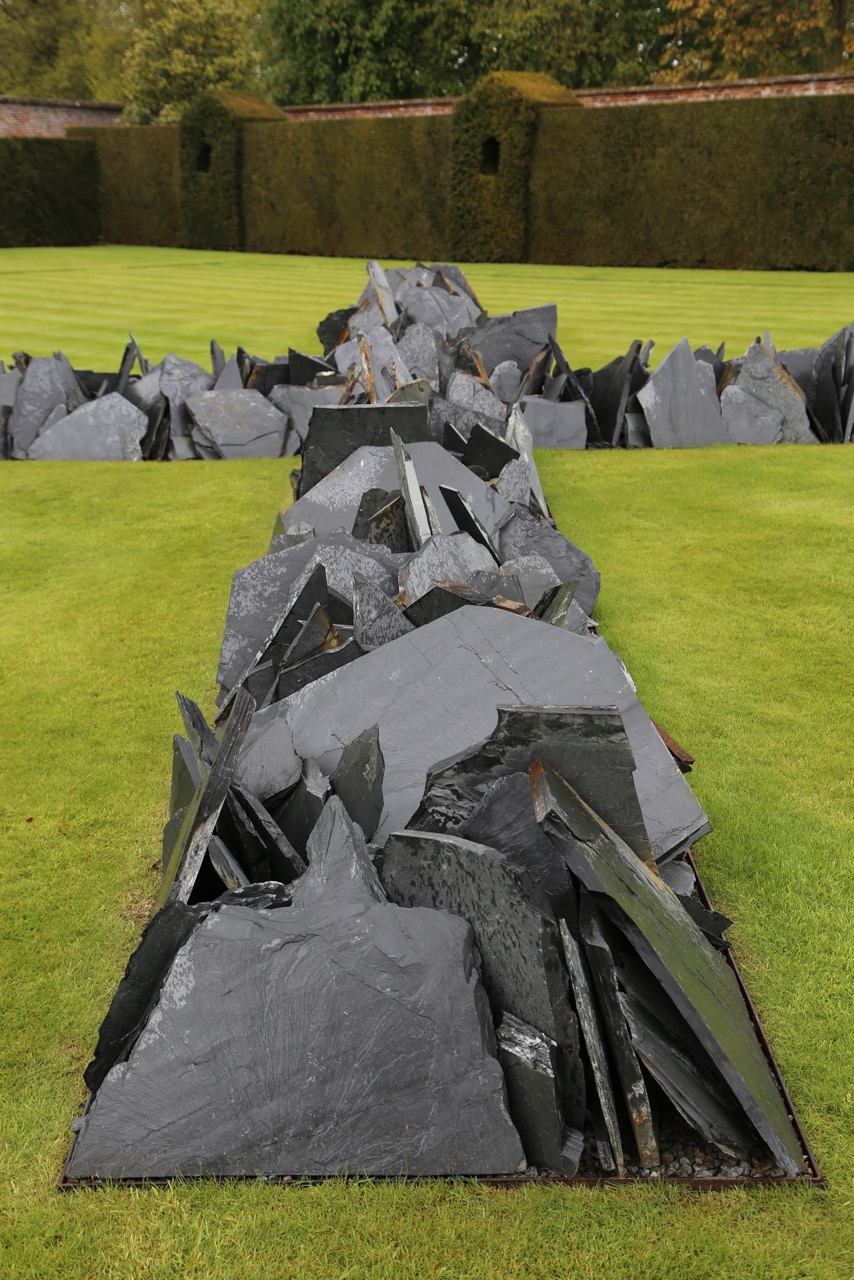 A gentler slate installation ‘Wilderness Dreaming’ graces the centre of the space to the North of the West lawn which contains notable works from a number of artists.. This spiral of slate flat against the grass gives intriguing perspectives along hedge-lined walkways towards the Hall.

Inside the Hall itself, in the self explanatory ‘Stone Hall’ is 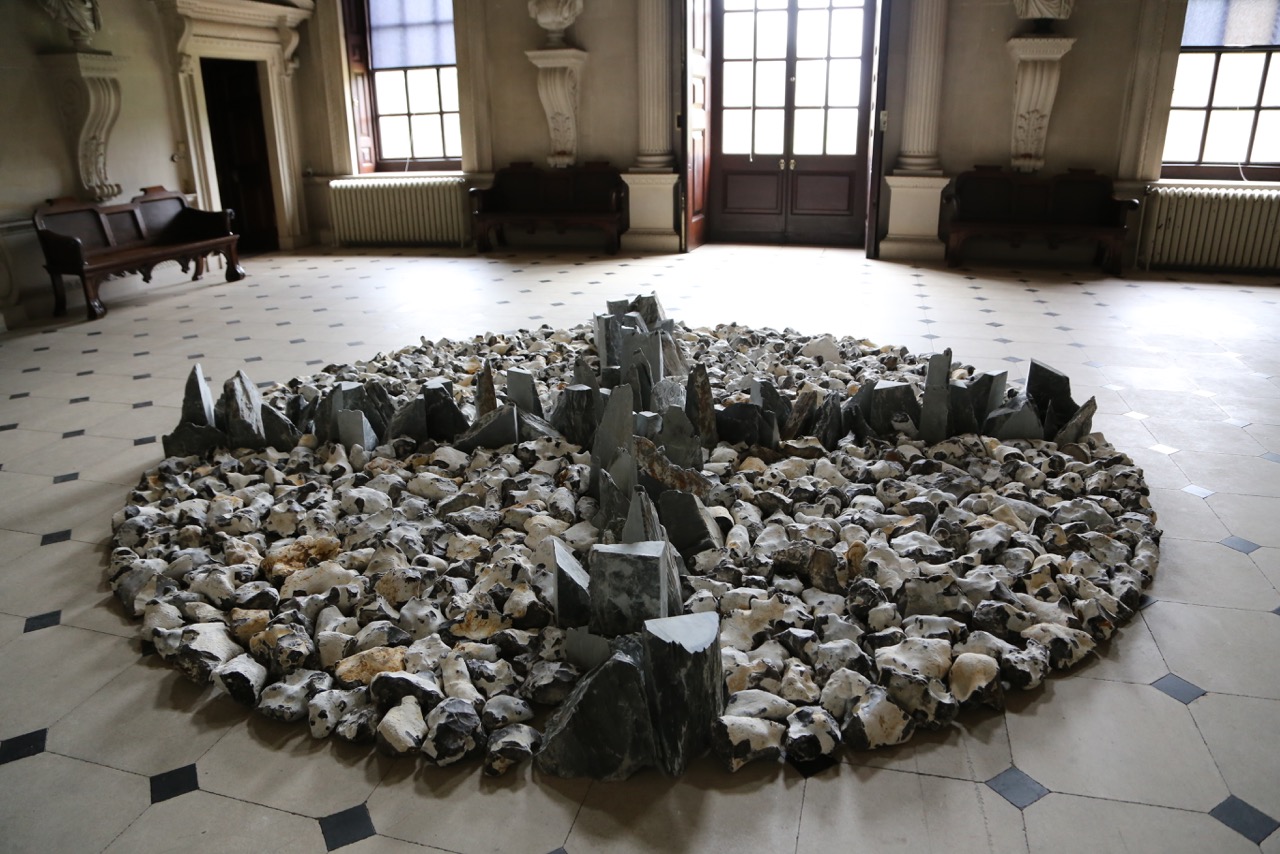 ‘North South East West’ a Cornish slate and local flint compass. In rooms with softer textures and furnishings this would be wildly out of place, but Long’s stone structure fits this rather austere formal stone hall elegantly.

The final new work is rather different, and consists of mud or paint thrown over black board within the colonnade archways that face out from the wings either side of the main Hall. These works are likely to be more ephemeral than the stone works, as weather and water will bring about the entropy that is characteristic of many of Richard Long’s landscape work. The technique of application generates complex yet organic patterns in a simple white on black pattern in each contrasting archway. Even the splashes up from the ground form part of these patterns.
These works by Richard Long fit the Houghton landscape and enhance any visit to this most impressive of large country houses. Take the time to visit, and give it plenty of time. You could walk around Houghton for days and still discover new delights and visions.
Houghton Hall was built by Britain’s first Prime Minister, Sir Robert Walpole in an ostentatiously grand style. It is refreshing to see the current custodian David Cholmondeley bringing in the best of contemporary contemplative landscape art to make use of the formal spaces created in the original grand design. This new collection is one to enjoy slowly and thoughtfully, and in varying weather conditions. Houghton Hall offers particular delights at the end of the day as natural light fades away and the collection of sculptures each reflect this in their own way.
©Julian Swainson
Listing:
Exhibition title: Earth Sky: Richard Long at Houghton
Dates: 30 April – 26 October 2017
Wednesdays, Thursdays, Saturdays, Sundays and Bank Holiday Mondays only.
Gates open at 11am – Last Admission is 4pm (one hour before closure)
Tickets: £18 per adult to visit Richard Long Exhibition, House, Gardens and Grounds
£10 per adult to visit just Gardens and Grounds.
Children 16 years and under are Free.
www.houghtonhall.com Tickets may be bought online and will be discounted. Use promotion code AAAA.
Read more about the accompanying education project here: http://belongathoughton.com
Richard has a website here: http://www.richardlong.org 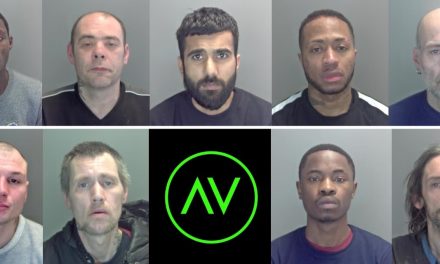 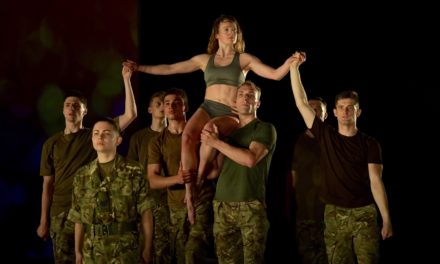 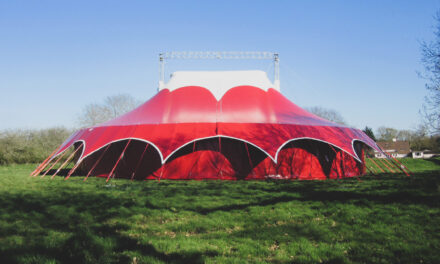