It is pantomime season, and the theatres are full of fluffy excess, overdressed dames and happy endings.

Someone has to buck the trend. Not for the first time, in Norwich we can rely on the Arts Centre boss Pasco-Q Kevlin to ditch the fluffy and bring us true grit. Badac Theatre Company tell tales of human rights gone wrong – noisy, challenging work that gets us thinking about how we treat each other as human beings in the more difficult and extreme corners of human experience.

The tone is set for the audience from the start. Herded outside the auditorium door we are marshalled in together to surround a steel mesh enclosure. There are no seats. It is not comfortable.

From the start, banging repetitive noise and endless repeated imprecations mark the manner of this piece. For the hour of the work there will be no pause, no let-up in this repetitive bang bang bang staccato delivery. The work is broken up into phases about a minute long where a brief dark pause (in light not sound) ushers in a slight change, a new paranoia or demand, a new despair or a revisit to an earlier cry.

Inside the steel mesh prison the set is as bare as the worst cell would be. Two steel buckets, one nearly destroyed. We soon see and hear why.

For many the first reaction to the start of the show would be very similar to our reaction as a society to people imprisoned for the worst of crimes, guilty or not. “What a noisy twat, lock him up, throw away the key, shut the door on him now”. Or her. Originally written with the prisoner to be played by a woman this play features Badac founder Steve Lambert as the prisoner in solitary confinement. He gives a performance that is characteristically physical and energetic, to the point where we really get a bit concerned about his welfare. The only other performer, Chris Thompson, is variously jailer, father or healer, with a purposeful confusion between these rather different roles.

As we cycle through the phases of imprecation a parallel story emerges that looks at cause, not consequence. What does it take for someone to have lost their humanity and to have their freedoms all removed? The exchanges with the father are the first clue that a traumatic, abusive young life has made the prisoner what he is today. A quieter, more desolate and desperate persona is revealed in glimpses, but no more. This prisoner is not simple and will never be nice.

Steve Lambert is a student and advocate of the Antonin Artaud philosophy of the ‘Theatre of Cruelty’. I cannot improve on Artaud’s own definition of this concept so will quote it: ‘The Theatre of Cruelty has been created in order to restore to the theatre a passionate and convulsive conception of life, and it is in this sense of violent rigour and extreme condensation of scenic elements that the cruelty on which it is based must be understood. This cruelty, which will be bloody when necessary but not systematically so, can thus be identified with a kind of severe moral purity which is not afraid to pay life the price it must be paid’.
– Antonin Artaud, The Theatre of Cruelty, in The Theory of the Modern Stage (ed. Eric Bentley), Penguin, 1968, p.66

‘The Box’ moves this philosophy further forward with a script touched with the experiences of modern or contemporary victims of abusive solitary confinement, whether in Syria, Palestine or in our Western prison systems run increasingly for private profit.

If this all seems a bit grim, then yes, it is, but so indeed is solitary confinement in a prison. Yet the performance did not leave me depressed or despairing – quite the opposite. We must challenge the reality of how we treat the most difficult members of society, and if we do not look in depth at the unpleasant nature of impositions we tolerate such as solitary confinement we will never progress from barbarity, and worse we will never break the circle of abuse from generation to generation. It leaves us struggling to define ‘punishment’, let alone grasp the purpose of it.

For an icy Wednesday night in January there was a good turnout of people who wanted to see this show. I would love to be able to take it to another audience. The next time at a Tory Party Conference a Home Secretary or Justice Minister wannabe talks about ‘condemning more and understanding less’ we should grab them by the scruff of their scrawny necks and plonk them in front of ‘The Box’. If Steve’s performance does not give them nightmares, they are definitely not human beings. This is Agitprop theatre at its very best, and however grim the theme and content it is still a fantastic piece of theatre. If you get the chance, go and see it. Steve Lambert is the master of confrontational drama, so try and catch him before he does too much more damage to himself.

This show was previewed in Norwich Eye here: https://norwicheye.co.uk/whats-on/badac-theatre-brings-the-box-to-norwich/ 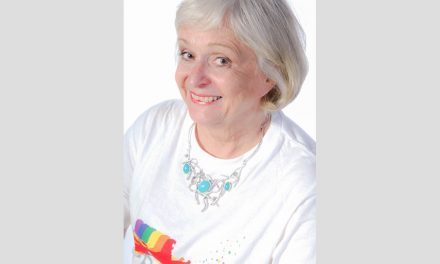