The Voice Project principals in the pulpit – © The Eye Snapper

In these depressing days of rampant egotism and endless competition it is good to be reminded what a large group of people working together can achieve. In Norwich we are fortunate that one very potent reminder of the strength and beauty of common purpose is amongst us in the form of the Voice Project Choir who performed their latest work ‘Between Stars’ this evening in Norwich Cathedral for a large crowd.

The Cathedral is a wonderful atmospheric setting for this ethereal and moving musical event. The building is as much a part of the performance as the singers themselves, with changing lights and settings accompanying the sounds.

The Voice Project were People’s Choice Award winners at the 2013 and 2014 Norfolk Arts Awards, and are currently nominees for 2016. They have taken their unique vision of what a community choir can be to international jazz festivals in mainland Europe, appeared on prime time French TV and had one of their London concerts broadcast on BBC Radio 3. It is now one of the best known choirs in the East of England, having given many hundreds of singers the opportunity to take part in unique creative performances of high quality new vocal music. Directors Sian Croose and Jon Baker have run the project since 2008. Jon & Sian also run vocal workshops designed to build confidence and encourage participants to explore a wide variety of uplifting and inspiring music.

The Voice Project Choir invited everyone to join the choir.  ‘All you need is enthusiasm’ said co-director Jonathan.

Tonight’s concert is their first full performance at Norwich Cathedral since 2013 and featured new music composed by Helen Chadwick (who has been commissioned by the likes of the Royal Opera House, English Touring Opera the BBC, Royal Shakespeare Company and the National Theatre), Orlando Gough, acknowledged as one of the UK’s most important composers and the Voice Project’s own Jonathan Baker. The modern music will accompanied words by Emily Dickinson, 13th Century Sufi poet Rumi and English Romantic poet Samuel Taylor Coleridge.

The performance offered participants the opportunity to sing under the expert guidance of Voice Project  ‘It’s a great way to sing your way through the winter!’ added Jon.

Sian explained ‘Singing in the brilliant acoustics of the Cathedral is always special and with this piece, at the deepest point of hibernation of the winter, we hoped to create a dream-like piece of music that transports the singers and the audience to a different place. Mid January can seem the darkest part of the year following the glitz and gaiety of Christmas. We worked with our fantastic team of artists to create a piece that fills the Cathedral with seasonal light and sound.

One of the special characteristics of the Voice Project’s work is their original approach to animating the buildings they perform in with music and light, taking a familiar place and encouraging us to experience it differently. It is good to see the Cathedral being used for a secular artistic purpose, to see this impressive building opened to many of us who would not normally go there.

The concert featured guests musicians and solo singers, with Lisa Cassidy, Rebecca Askew and Jeremy Avis joining Sian and Jonathan as the principal singers.. It is the first part of the choir’s exciting new project ‘The Arms of Sleep’. Between October 2016 and January 2018 a sequence of pieces are being created for the choir, exploring themes of sleeping and waking. As well as commissioning composers and poets, Jon and Sian will be working with sleep scientists and designers to create world–class choral theatre in inspiring surroundings. This will involve performances for the Norfolk & Norwich Festival next May and site specific performances at festivals around the country in 2018.

This was an uplifting and enjoyable evening in a majestic setting that transported all, audience and performers, out of the gloom of a dark and icy January night. The Voice Project have taken on a big challenge to fill a cathedral with sound and vision, but their project is inclusive, inspiring and hugely enjoyable and extends a similar challenge to every performer who seeks a new way to delight and entertain an audience. The illustration commissioned from Beverley Gene Coraldean for the programme 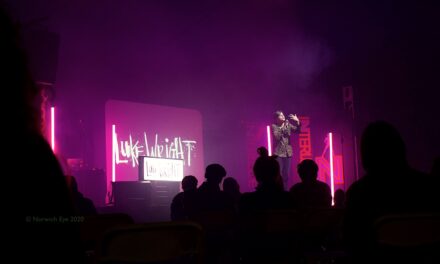 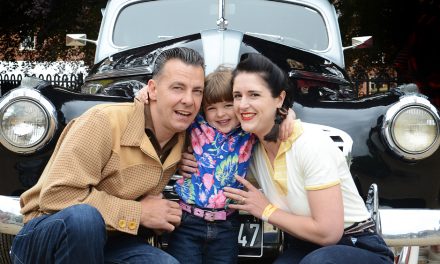