‘The most relevant poet of his generation’ (Exeunt) ‘Cool poems!’ Patti Smith

Following the unprecedented multi award winning success of his first stage play, the region’s favourite poet Luke Wright returns to his roots in the first half of 2017 with 25 nationwide dates performing poems from his new collection The Toll. The tour opens on home turf at Norwich Arts Centre on 24 January before heading out to all corners of the country.

The poems in The Toll visit the flat-roofed pubs and half bought couches of Brexit Britain as it struggles with doubt, duty and half-cut nights spent shouting impotently at Question Time on TV. Wright’s poetry ranges from the laugh out loud funny to the tear-inducingly poignant and back again, as he effortlessly takes his audience with him on the ride switching emotional gears without missing a beat. Wright makes poetry accessible, normal even.

‘I wrote these poems over the last three years’ says Luke. ‘There’s a range of subject matter including lots of stuff about family, about England, and about heartache. It’s about The Toll that life takes on you, but also about duty and trying to do the right thing. As ever in my work, politics and social issues lurk in the background ready to pounce …’

Spend an evening with a gifted and compelling raconteur at the top of his game, as he spits out visceral, inventive verse that sweats, bleeds and sings. See a video sample of The Toll here https://www.youtube.com/watch?v=z1yWEfUyq9w

The book will be published by Penned In The Margins on 2 February.

‘Quite simply, this is the future of popular poetry’ The Skinny

The Toll follows Luke’s 2013 debut collection Mondeo Man, of which Huffinton Post noted ‘If any contemporary collection is going to convince the unbeliever that poetry can be a riot of cheek, giggles, boobs, tears and Facebook – while keeping its artistic integrity firmly intact – Mondeo Man is it.’

Luke Wright is a poet, theatre maker and broadcaster who has written and starred in eight solo shows of his poetry as well as ‘What I Learned from Johnny Bevan’, the play that sold out a three week run at London’s Soho Theatre and toured extensively. It won a Fringe First award for new writing, The Stage Award For Acting Excellence, The Saboteur Award for Best Spoken Word Show and is currently nominated for an Off West End Award. It was published in both hardback and paperback.

He tours the world each year (as far afield as China and Australia) with his unique brand of poetry and can often be seen opening for John Cooper Clarke. His verse documentaries on Channel 4 have been enjoyed by millions of viewers and his poems can often be heard on BBC Radios 3 & 4 and sometimes further afield. He has been a regular contributor to Sony Award-winning Saturday Live and has numerous main channel TV appearances under his belt. Luke curates the spoken word line-ups at The Latitude Festival, Festival Number 6 and The Edinburgh International Book Festival.

‘Sit-up-and-listen good, a zestful relish for pump-action wordplay with a thoughtful and deeply felt understanding of just how messed up Britain is’ Dominic Cavendish Daily Telegraph

Listings info:
Luke Wright: The Toll – Spend an evening with a raconteur at the absolute top of his game as he spits out visceral, inventive verse that sweats, bleeds and sings
Norwich Arts Centre, St Benedicts Street Norwich, NR2 4PG 01603 660352 www.norwichartscentre.co.uk

Read the review of Luke Wright’s previous show ‘What I Learned From Johnny Bevan’ from our predecessor site Norwich Spy:
“Luke Wright gave a capacity audience at Norwich Arts Centre a show of unmatched passion, power and poignancy in the outstanding performance of the 2016 N&N Festival. ‘What I Learned From Johnny Bevan’ is fast paced, articulate and heartwarming and perfect in execution.

From the breathless start Luke sets a fast relentless pace to the show which underlines the passion and power of his account of a vital and inspirational relationship between two young men who meet as UEA students sharing a delight in poetry and performance. Johnny Bevan comes from a grim tower block and a troubled family background, but guides the young Nick away from his parent’s ambitions to find his own voice through language, literature and performance poetry.

In the way of youthful exuberance the relationship fades after initial intensity and a difficult family encounter, but is rekindled twenty years later when they rediscover each other through the means of social media. Nick has thrived in the shallow delights of the London media world, whereas Johnny has become one of the many in our society who have felt alienated and abandoned by the shallow political consensus of the Blair and Cameron meritocracy.

Luke is a gifted poet and his command of language is assured and effective. Several parts of his show could stand alone as powerful polemic or poetic performance, but Johnny Bevan has a message that we need to hear, and Nick, voiced by Luke, conveys that message with furious eloquence.

Behind Luke is a screen, with delightful monochrome painted images projected to illuminate the context of the narrative, images of London, Norwich and Colchester, the settings for the path that Nick chooses.

There is music too, to enhance but not obscure the power of the text that Luke delivers at a pace few of us could match.

This is a timely piece that reflects the growing dissatisfaction with a democracy that currently seems only to serve the middle classes and the wealthiest in society, and accurately portrays the backlash against Blairite centrist ideology that has found a potent new voice with Corbyn. This show should be mandatory viewing for any MP claiming to be the voice of the dispossessed or disadvantaged in British society. It is no coincidence that Clive Lewis is an advocate for this show, having taken Luke to Westminster to perform it.

Polemic without humour or humanity will soon lose an audience, but Luke Wright shows a dazzling understanding of what makes a performance engaging and captivating. If you get the chance to learn from Johnny Bevan, don’t miss it”. 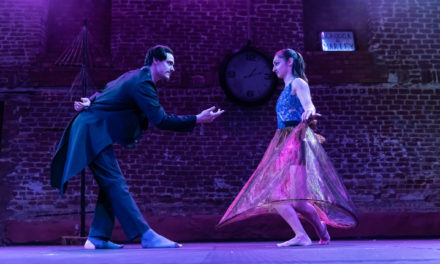 Norwich Eye reviews A Circus Carol at the Playhouse