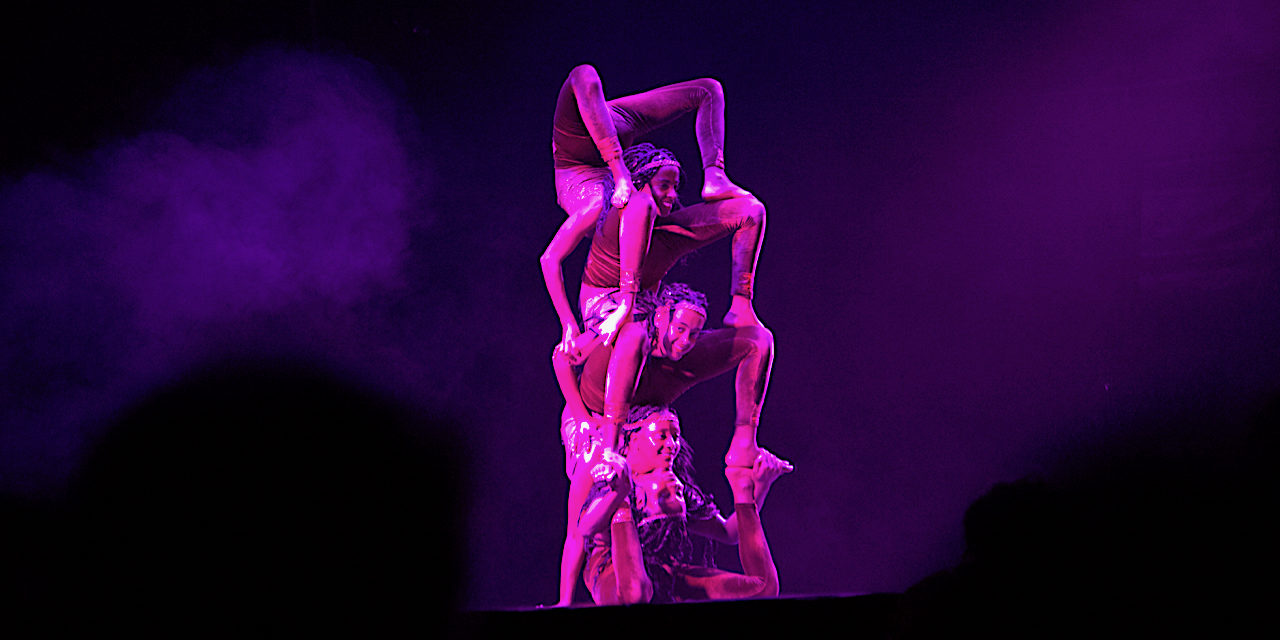 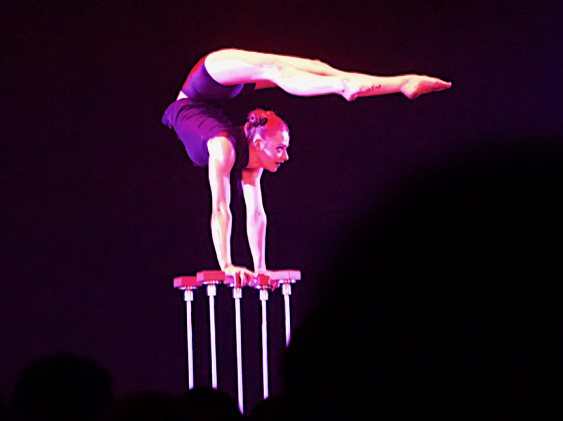 The City of Norwich hosts a greater diversity of arts providers than any comparable sized British city or town, and amongst this diversity we can boast of a dedicated and specialist circus training venue at the Oak Circus Centre. Their performing company Lost In Translation Circus have brought their big top to Chapelfield gardens for a delightful and wide ranging four day programme of circus events.

We managed to catch three of their eight shows in the diverse selection offered to Norwich.

Hotel Paradiso is a Norwich-born show that highlights the skills and stagecraft of the resident Lost In Translation (LiT) company. Like some of the most internationally famous and successful circus companies the company are blending circus skills into a theatrical narrative that offers a clear storyline and plot with recognisable characters developed by the individual performers. This particular piece of whimsy is about the declining fortunes of a once swish hotel, whose loyal staff will always do that little bit extra to defend the hotel against the predatory bankers who want to close them down. 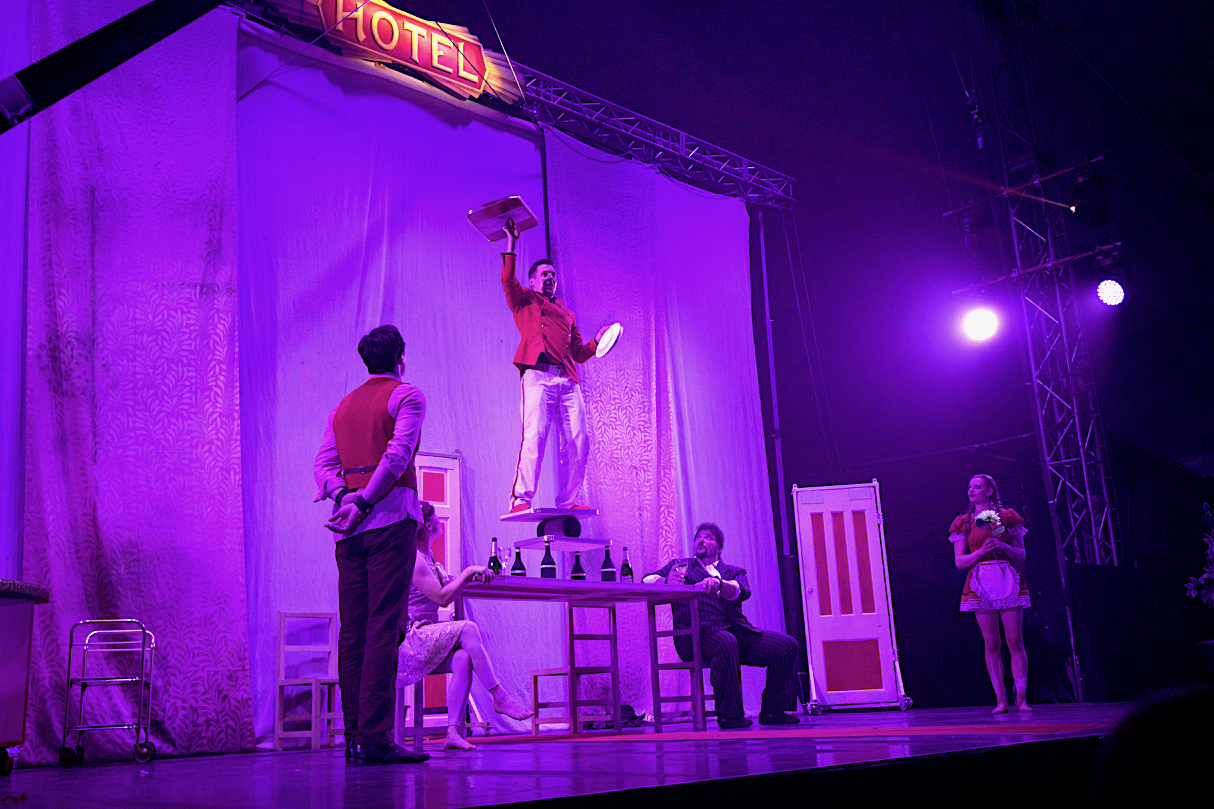 Company Director Massimiliano Rossetti and Roisin Morris play the baddies, the evil bankers bent on seizing the hotel’s assets, while Lost In Translation regulars Matthew Green and Natasha Rushbrooke bring their formidable circus talents into the narrative. The result is a charming show guaranteed to get you smiling amidst the inevitable ‘oohs’ and ‘aahs’ as we admire the artiste’s skills. LiT may not yet have the theatrical panache of Cirque Soleil or Cirque Eloise but they improve hugely every year and with skilled theatrical direction they will soon be a serious competitor to these international companies. Keep an eye open for their next moves!

Circus Abyssinia are a stunningly skilled 15-strong company from Ethiopia who perform breathtakingly audacious routines. These are all set to pulsating African musical beats that perfectly suit the pace and panache of the company. The costumes are wild and sexy and the action defies belief, whether it is the multiple lads leaping around on Chinese poles or the impossible contortions and acrobatics of the four girls. The pace is relentless as this troupe take everything a little bit further than you think possible. Their Saturday night show was a complete sell out – if you see them advertised in future book early as they give a stunning show. Circus Abyssinia take on a range of traditional circus skills but take them a bit further than you might expect, all served up with an exciting musical backing that guides their precise timing and presentation. This is a show that has all of us smiling and clapping throughout, with one or two stronger expletives of disbelief when they appear to achieve the impossible, which happens a lot in their show. 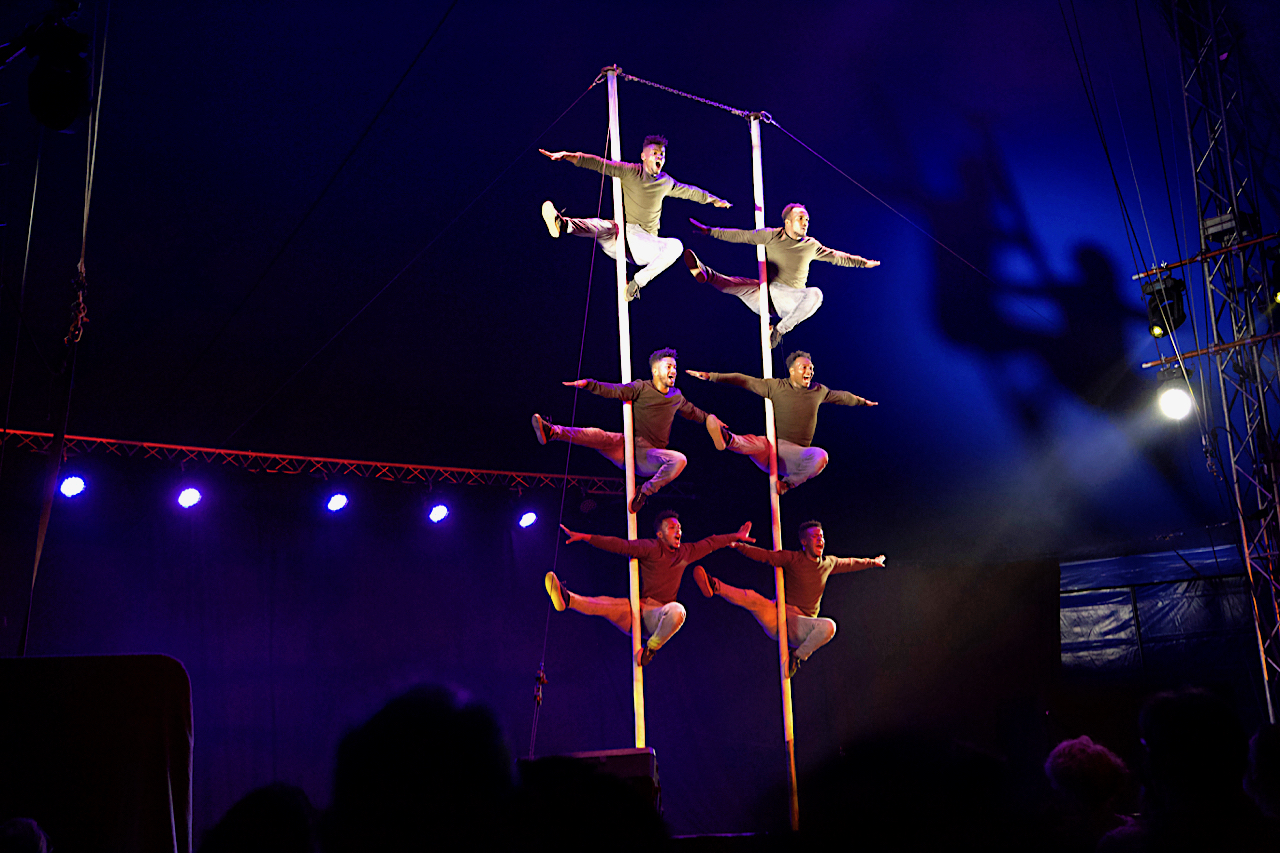 The late night Circus Cabaret was a great success last year and returned in robust and rude form for this circus weekend. The host who gave us a suitably risqué song or two was the urbane and occasionally sober Dusty Limits. First up was the highly talented local star Natasha Rushbrooke from LiT with an impressive display of hand balance and acrobatics. Natasha always sets herself a high standard and is a joy to watch. She was followed by Australian born Crystal Stacey (often found with the stereotype busting Hot Brown Honey troupe) who dispensed with most of her outfit while doing impossible things with hoops and on the silk slings. Everything she did was precise and quick and very impressive. She was followed to the silk slings by ‘Fern and Alice’ who gave a perfectly choreographed aerial duo display then by the first of two sets from Vendetta Vain, showing her skills and a lot more on an aerial hoop display wearing a big-eyed cuddly animal mask, and a tail, and very little else. In her second set (Dirty Laundry) Vendetta Vain faced the challenge of pegging out her washing while apparently everything was in the wash. Initially stuck for clothes pegs she starts to find them in increasingly unlikely corners of her body, finally solving the mystery of just where that lost sock disappeared to. As we have come to expect from her she does everything with athletic grace and great style extending her undoubted circus skills into the world of modern burlesque. 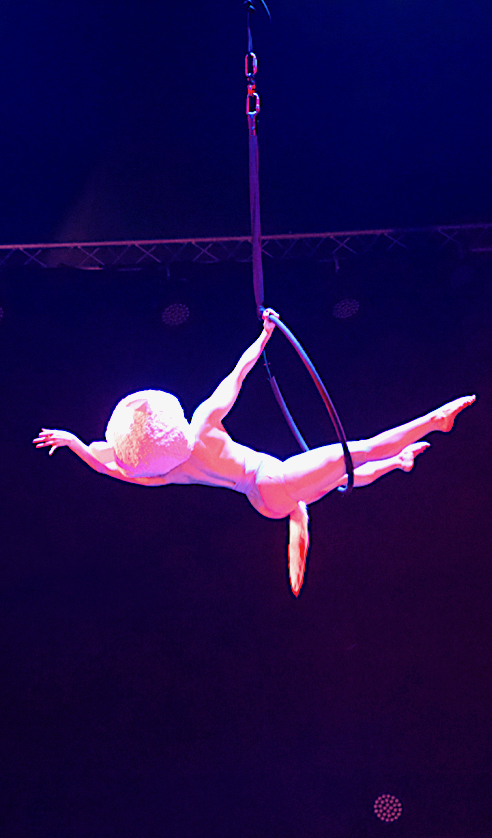 Gentleman juggler Ian Marchant took us through several clever versions of familiar juggling tricks in a distinctive personal style and the show was completed with considerable elan by the impressive aerial display from Joe Keeley.

Overall this late night show was a well balanced mixture of the best of circus and the joys of late night revue and alternative cabaret. It is a mix that works well and was well received by a young and enthusiastic audience. The performers have to be fit to be in the circus, but they are all also clearly happy with and proud of what they do and who they are. Lost In Translation have collated a series of of shows that bring the best in circus from around the world and Norwich is enriched by their efforts. I look forward to next year’s Summer Circus extravaganza, but meanwhile make sure that you support the Lost In Translation crew in their other shows and their wonderful training work at the Oak Circus Centre in Colegate.

Find out more at lostintranslationcircus.com 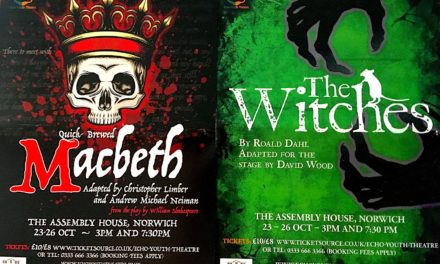