Noël Coward left us a legacy of finely written plays whose success can be judged by their continuing ability to fill theatres. Blithe Spirit is one of his popular works that has been revived many times, as well as being re-presented as a musical and a film starring Margaret Rutherford. This week sees a fine version on stage at Norwich Theatre Royal.

Blithe Spirit is set in the comfortable if rather over-used setting of a mid 20th Century home of someone wealthy enough to employ servants. It depends on the myth of spiritualism to build the plot. Writer Charles Condomine (Geoffrey Streatfield) wants to use a story of the occult in his next book, so arranges a séance at a dinner party with second wife Ruth (Lisa Dillon) and their friends Dr and Mrs Bradman and the eccentric medium Madame Arcati (Jennifer Saunders).

We are diverted from the start by the odd behaviour of the nervous maid Edith (Rose Wardlow), whose stumbling and gauche behaviour is used to set the scene for subsequent humour. Edith is nervous and clumsy just a bit too much, but is portrayed with great skill by Rose. Condomine’s second wife Ruth is not best pleased with his frequent idolatry of his deceased first wife Elvira, so when the séance brings Elvira (Emma Naomi) back, but only visible to Charles, the scene is set for chaos.

Saunders’ Arcati is a delight. She brings all the quirkiness that the Coward script demands, and then a fair bit of her own. Her arms spring up all over the place as if she has an invisible need to toss stuff everywhere. At times, she looks like the lately lost Terry Jones at his Python best while giving a very credible rendition of the house guest from hell. Arriving after a seven mile cycle ride uphill she enters with visibly sweaty armpits, wafting her skirts about to freshen herself up. Saunders takes the performance just to the edge of overdoing it, but creates a memorable and marvellous character.

Much of the plot depends on the rather dated assumption that a new wife is jealous of her deceased predecessor, who was apparently rather more endowed in the attributes of female beauty. When Emma Naomi appears as the spirit made substance of the late Elvira her ex husband Charles is understandably distracted, she is rather lovely. The stage lighting manages to give her an ethereal glow wherever she is on stage, while her spiritual form seems to harbour some fairly earthy sentiments. Lisa Dillon and Geoffrey Streatfield together as Ruth and Charles give a very good account of the married couple who have had to come to terms with the baggage that each brings from previous matrimony. They have reached the stage where marriage is a strategic battleground rather than a dewy-eyed infatuation. This is adroitly pointed out by Coward in his dialogue between Charles and his spirit-form first wife Elvira.

Blithe Spirit takes the revivification of dead souls to the limit, but we can accept it as the whole play is really a bit daft. Director Richard Eyre has created a hugely enjoyable version of this Coward classic, and I am sure nobody will go home disappointed from this well performed classic. The set, staging, lighting and direction are all first class, but it is the faultless and engaging cast that make this show a joy from start to end. 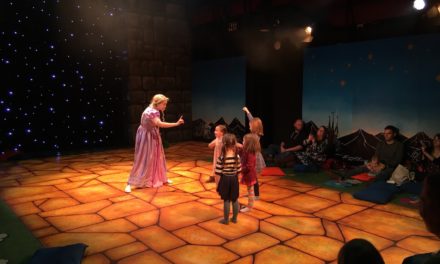