The Watermill Theatre Company are in Norwich this week bringing two lively productions of Shakespeare classics to the Theatre Royal stage. Our guest reviewer Gareth Douce saw their Macbeth:

The main man returns triumphant from his recent campaign success. He chances upon some shadowy characters intent on celebrating his victory, recognising his potential, and prophesying a future career path he may choose. These dark forces foretell his route to the top job! The top job may have been all that he ever dreamed of – but this wasn’t Alexander Boris de Pfeffel Johnson after the 2016 referendum but Billy Postlethwaite in the title role from ‘the Scottish play’ with The Watermill Ensemble.

Featuring genuine Elizabethan/Shakespearean electric guitars, this production is a world away from the classical versions many of us were required to study at school. Interlaced in the performance were songs from The Rolling Stones, Johnny Cash, and Roy Orbison. Tracks skilfully selected and performed live by the cast to add to the atmosphere and compliment the storyline.

Living up to expectations, Lady MacBeth (Emma McDonald) had the presence and Machiavellian dominance that the character’s reputation demands, but naturally allowed her husband some time alone in the presence of Duncan. The regal Duncan (Jamie Satterthwaite) was chilling in MacBeth’s guest room, and thought he was only dreaming that his trusted friend was also in the room. Sometimes dreams come true. Not one for doing half a job, MacBeth made sure Duncan had a good seeing to, then was well and truly finished off. Clearing the way to be King. Deeds weigh heavy though. Lady MacBeth reflects that getting everything you ever wanted doesn’t bring you peace. Her mental health suffers greatly, and MacBeth seeks assistance from the doctor, who left things for Lady MacBeth to work through on her own instead of providing the support and counselling that MacBeth sought for his queen.

Clearly, there are some themes that keep coming around again and again throughout history; power struggles, and the need for mental health support for wellbeing. This production gives food for thought about both. Don’t miss your chance to see this skilled team in action while they are in Norwich.

See our review of A Midsummer Night’s Dream here: http://norwicheye.co.uk/whats-on/norwich-eye-reviews-midsummer-nights-dream-by-the-watermill-theatre/ 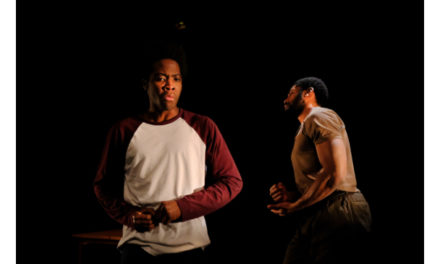