This week, on Friday 16 March, the historic Maddermarket Theatre will open The Norwich Players’ latest production, Jerusalem by Jez Butterworth.

This provocative play tells the story of Johnny ‘Rooster’ Byron, local waster and Lord of Misrule. Johnny is a wanted man: the council officials want to serve him an eviction notice, his son wants to be taken to the fair, a vengeful father wants to give him a serious kicking, and a motley crew of mates wants his ample supply of drugs and alcohol. Called ‘unarguably one of the best dramas of the twenty-first century’ by The Guardian and with themes of national identity, this modern masterpiece is sure to provoke debate.

Playing the iconic role of Rooster, and making his Maddermarket debut, is local actor Nick Meir. “Playing Johnny ‘Rooster’ Byron is the theatrical equivalent of trying to swim the Atlantic,” said Nick, “It’s monumental, it’s scary, and deep down you wonder if it’s a good idea to even attempt it. Fortunately, we have an outstanding cast so if I start drowning I’m sure they’ll be there with the lifeboat!”

Over the past few months the Maddermarket Theatre has been forging closer links with students at the University of East Anglia and in this production they make up half of the cast. Nyree Williams, an English and Drama student at UEA said, “I love acting at the Maddermarket. Acting outside the uni bubble, alongside people older and more experienced than myself has been invaluable.” Katie Smith, a student of Scriptwriting and Performance at UEA added, ‘The Maddermarket has given me the opportunity to work alongside a brand new range of people and to perform for a longer run than is possible at university. I can’t wait for people to see the show”

Directing Jerusalem is the Maddermarket Theatre’s Director of Productions, Jez Pike who today said, “Jerusalem is undoubtedly the best play I’ve ever had the chance to direct. It has everything; richly drawn lovable rogues, comedy, shock, a ticking time-bomb of a plot and an incredible arc that goes from the personal to the epic. Rehearsals have been not only great fun but tremendously exciting. You can tell when a cast really trust a script and each other. As the Director of Productions at the Maddermarket it’s a pleasure to see talent and ideas being shared across a multi-generational cast with fresh faces joining Norwich Players stalwarts”.

Jerusalem premiered at the Royal Court in 2009, before transferring to the West End and then Broadway. It became an instant modern classic and its rich tapestry of reference, from William Blake to the Bible, quickly led to it being studied on both Drama and English A-Level syllabuses.

Jez Butterworth is one of this country’s leading playwrights. His plays blend rich, alternative characters with the structure of a ‘well-made play’ and a unique, highly energetic voice. Having first broken onto the scene with Mojo in the 1990’s, Jerusalem instantly turned Butterworth into hot property. His subsequent plays The River and The Ferryman have sold out almost instantly and been met with considerable critical acclaim. Recently his fascination with English identity and myth found its way on to the small screen, with Sky’sBritannia which he co-created and wrote.

Jerusalem runs from Friday 16 until Saturday 24 March at the Maddermarket Theatre, St John’s Alley. Tickets are priced at £12 (£10 concessions) and are available at the box office on 01603 620917 or online at maddermarket.co.uk.

“My dad said he jumped buses. Horseboxes. Jumped an aqueduct once. He was gonna jump Stonehenge but the council put a stop to it.” 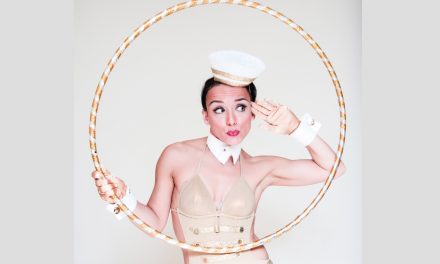 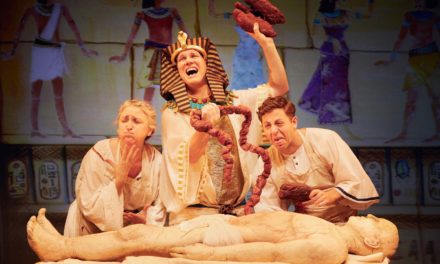