Say what you like about a good Greek tragedy, but they do what they say on the tin. They start badly and often end worse, with a good helping of trouble along the way. The body count is never zero.

The Jean Anouilh re-write of Sophocles’ Antigone is no exception to these rules. The themes are constant and sadly as relevant now as they were when Sophocles was first packing the theatre tiers.

The more modern presentation, style and language of the Anouilh text just gives us an easier access to a story that is about the breakdowns within families, the passion of youth set against the cynical wisdom of experience, and above all the destructiveness of populist politics. Anouilh first brought this play to German occupied France in 1942.

With almost a stageful of descendants of Oedipus (albeit half of them dead already) it is going to be a rocky ride when family values and their interplay comes into focus.

Antigone and her sister Ismene are the daughters of the late king Oedipus who amongst other eccentricities unwittingly bedded his own mother. His two sons Eteocles and Polynices were granted shared kingship of the city state of Thebes, but were rogues who fell out and at the climax of a civil war managed to kill each other. The thronging masses, it seems, demanded a hero and a villain, so Eteocles had a fine state funeral while Polynices was left out to die in the open, with dogs eating his rotting corpse and his immortal soul never freed by the dignity of a proper faith based burial.

Antigone and Ismene’s uncle Creon steps up to the throne and does his best to restore order. This includes the decree about which brother was buried, and which not. In a useful sub-plot his son Haemon is betrothed to teenager Antigone, while possibly being quite keen on her older sister Ismene too.

Antigone, played with appropriately furious passion by Daisy den Engelse is found dirty and dishevelled in the early hours by her nurse (Christy Gosling). She is clearly in that intensely fatalistic mood that only parents of teenagers can truly recognise. She eventually makes clear to her sister Ismene (Imogen Fitzgerald) that she is determined that her late brother shall not go unburied, in spite of her uncle’s death warrant upon anyone who attempts this.

The key scene in the play is between Antigone and Creon (Sam Ings) after Antigone has been caught by the guards around the dead body of Polynices. This is where the irresistible force of a determined teenager comes up against the immovable object that is her uncle (and the King) trying to explain the demands of realpolitik to her. They are well matched in their dialogue, which is perfectly delivered by Sam and Daisy. This is the dialogue which will determine both their fates, although you could of course take the Greek view that their fates have been pretty tightly determined all along by, well, fate.

This is a meeting of stubborn minds, and at one point we seem to see the beginning of understanding and reconciliation. It is a beginning, and I will give you no spoilers, but this is a Greek tragedy. The dialogue between Antigone and Creon may be a few thousand years old, but is completely relevant and contemporary to the challenges that still face parts of our contemporary society. Every day families here and across the world lose their young to causes of idealism and fiercely held belief. Sophocles knew all this stuff.

Director Jo Reil has energised the young cast to hurtle through this history at a breakneck pace. There were a few first-night nerves and slips, but very few, and in the hallmark of fine drama we soon become obsessed with the story and not those delivering it. In the earlier scenes, the pace was a shade too fast for me and I would like to have seen the excellent cast give a bit more room to breath, pause, and let the impact of their words really sink in to the audience. The most terrifying part of a tense dialogue to observe is the silent pause before the response, and this ensemble could enhance their impact by slowing down a bit. However as they go on and relax into their roles the timing becomes just right, and the key dialogue between Antigone and Creon is faultless. Daisy den Engelse gets the confident righteous indignation of a girl with an unshakeable belief just right, showing how that very confidence can be so fragile when put under great pressure. Sam Ings as Creon conveys the both the authority of a new king and the tenderness of a troubled but loving uncle. As a politician of any sort, even a king, you can expect to start well and then go gradually but inevitably downhill as hubris takes over. Creon is your go-to reference for this.

The young cast of this play lack no enthusiasm or stagecraft. Two groups of three play a significant part – the three guards (Charlie O’Brien, Oliver Allen and Freddie Palmer) and the three who play the chorus, a role first brought to the UK stage by the singular Laurence Olivier, but here played by Kyla Harwood, Jade Causton and Ruby Pinner. The guards have the joy of a little light relief in a grim tragedy, while the chorus are the narrators. It is a difficult role to split into three and I would have liked to see more emphasis of the ‘three as one’ concept which could add much to the drama but also requires precise co-ordination of delivery and stage attitude. Players with more minor roles also stood out in this performance – Kyle Davy as the messenger had few lines but got them just right. Perhaps he knew that in the first US production of this play in 1946 a certain Marlon Brando used this role as a step to fame and success. Imogen Fitzgerald played Ismene perfectly, showing the more glamorous older sister who realises that her younger sister has in fact taken the courageous lead when it really matters. Christopher Sainton-Clark gives us a carefully measures Haemon, doomed to follow his love for Antigone to its conclusion.

This is a confident and sassy production that shows how we can be excited that a new generation of stage stars are learning their craft in the Theatre Royal’s new Stage two facility. These actors are worth seeing now in this excellent play, and worth remembering for when they build upon this experience in their future careers. 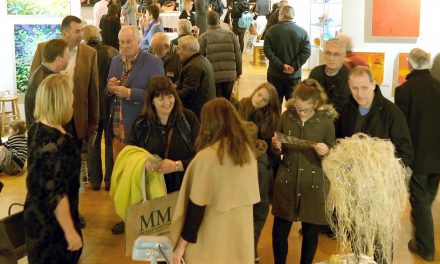