Police motorcyclists using plain bikes have be hitting the highways in Norfolk targeting drivers who use their mobile phone behind the wheel.

Operation Ringtone sees officers patrolling the roads with marked and unmarked cars and motorcycles, all fitted with cameras to obtain evidence to help secure successful prosecutions.

New unmarked motorcycles are being used to target drivers using mobiles in the most dangerous situations, particularly faster roads such as the A11 and A47.

The launch coincides with a week-long national campaign led by the National Police Chiefs Council, which encourages all forces in England and Wales to target the offence which started on Monday and runs until Sunday (November 14-20).

Chief Inspector Kris Barnard, head of the Norfolk and Suffolk Roads Policing and Firearms Operations Unit, said the use of covert tactics enhanced enforcement efforts with this type of offence.

He said: “Modern cars are very safe and I think this can sometimes provide a false sense of security to some drivers who feel it is acceptable to take risks and use their phone. Often, when patrolling in marked vehicles people adapt their behaviour accordingly; the benefit of unmarked vehicles is that we will capture behaviour as it happens and on camera. All roads policing vehicles are fitted with cameras and the motorcyclists will be wearing head cameras to secure evidence and successful prosecutions.

“There’s certainly many drivers who feel it is acceptable to drive while using a mobile phone; in our day-to-day journeys we all witness it, momentary glances looking down at a phone or the more blatant offender seen holding and talking on their phone. The key thing to remember here is that while you’re behind the wheel you are in charge of, on average, a two-tonne machine, which can seriously injure and even kill people if you’re not in proper control.”

Last week, educational courses offered to first-time offenders for driving while using a mobile phone were withdrawn by Norfolk and Suffolk Constabularies. This follows proposed changes going through Parliament which included recommending police forces to no longer offer the course.”

Ch Insp Barnard added: “With the proposed changes in mind it makes sense to adopt this approach with immediate effect, supporting our aim of making this offence as socially unacceptable as drink-driving has become over the years. Drivers might not think a momentary glance at a text message is harming anyone, but think of what’s going on around you. Hazards on the road, especially when driving at speed, can change so quickly and in that moment if you’re not concentrating 100% you could easily cause a crash, injure or kill someone else, or become a casualty yourself. Wrong place, wrong time maybe…but think, is that text message really worth it.”

Norfolk Police and Crime Commissioner Lorne Green said: “If you’re thinking picking up that phone is worth the £100 fine, let’s get real. If you use your phone while driving, you risk killing someone – not to mention yourself. That’s the potential penalty and surely there’s no greater deterrent. Wake up and smell the coffee – Stop it.” 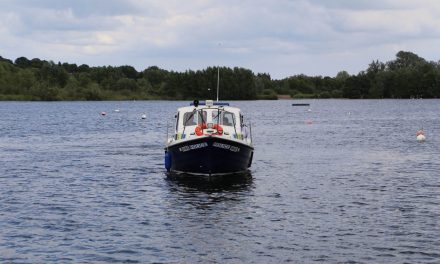 Boat owners urged to be vigilant following thefts in Brundall