Next week, from Friday 20th until Saturday 28th July, the Norwich Players give new life to a hidden treasure of British theatre with a rave revival of Peter Pan writer J.M. Barrie’s Regency play Quality Street. When the play premiered in 1901, Barrie’s affectionate evocation of life in a small English town proved so popular that when Mackintosh’s later launched a new line of confectionery they not only named the chocolates after it but designed packaging featuring its lead characters.

It is the story of a young woman, Phoebe Throssel, who, after being seemingly presented with love finds it suddenly eludes her. It then proceeds to entirely confuse her (and everyone else) before finally – after the kind of longing one associates with Jane Austen and antics of disguise and mistaken identity worthy of a Shakespearean comedy – finds her for good; truer and richer than ever before. With a cast of fourteen plus a team of costumed stage crew, it’s a sweeping romantic comedy traversing a decade, and yet at the same time – as one might expect from the author of Peter Pan – is a tender tale as intimate as it is epic.

In recent years Barrie has been rediscovered by a new generation of directors, actors and theatre-goers but Jez Pike’s reimagining of the play puts the women of Quality Street at the fore.

Jez Pike Director of Quality Street said, “Quality Street is a play dominated by women, and in my version of Barrie’s text which we will be premiering, I’ve sought to bring their voice to the fore.

“The English theatre Barrie wrote for was an even narrower more conservative version of the restrictive Edwardian society of which it was a reflection. The regressive backlash to Wilde’s trial of 1895 is arguably one of the reasons it saw no equivalent to Ibsen emerge in the first decade of the 20th Century.

“Barrie’s female characters are undoubtedly written with a sympathetic eye yet are far from emancipated. In the original text, the romantic journey of Phoebe Throssel concludes with her complying with the Edwardian ideal of ‘a lady’; a version of womanhood defined by the male expectations. Through a combination of editing, manoeuvring and re-writing, I have shifted the trajectory of Phoebe’s journey so that the conclusion is compliance with her own sense of self, rather than anybody else’s.”

Productions at the Maddermarket Theatre are always an incredible team effort, but a play of Quality Street’s scale and visual flair means that the design departments are working flat-out at the moment. You can expect a set of some considerable ambition and Regency costumes that fill the stage with colour.

“Was I born to be confined within these four walls? Are they the world, Susan, or is there anything beyond them? I want to know.”

Regency England; a time of balls, bonnets and dashing gallants. Prepare for a sweeping romantic comedy about love, forgiveness and mistaken identities.

As England’s young men fight on the fields of Europe, the women of Quality Street are engaged in their own battle. Not against Napoleon; against the clock. They must secure a husband and a future before society calls time. Phoebe has Valentine in her sights and when he declares an imminent announcement the wedding dress is already being measured up. Yet love does not always declare itself openly and a heart, once broken, may never heal. If Valentine and Phoebe are ever to be together they must first endure the merry-go-round of saying anything but what they actually mean, and being anyone but who they truly are.

Barrie’s rarely seen original is a charming blend of the warmth of Jane Austen and the wit of Oscar Wilde. The original London production ran for 459 performances and was so popular Mackintosh’s named their new brand of chocolates after it. Written three years before Peter Pan, its creators trademark themes – the joys of innocent youth and the pains of growing older – are given a playful first outing.

Jez Pike’s new version affectionately re-imagines this Edwardian classic to give full voice to the women of Quality Street as they seek to define themselves by their own terms.

Quality Street is on stage from Friday 20 until Saturday 28 July at the Maddermarket Theatre, St John’s Alley. Tickets are priced at £8-£12 (concessions available) and can be purchased at the box office on 01603 620917 or online at maddermarket.co.uk. 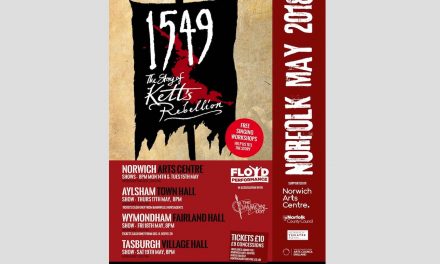