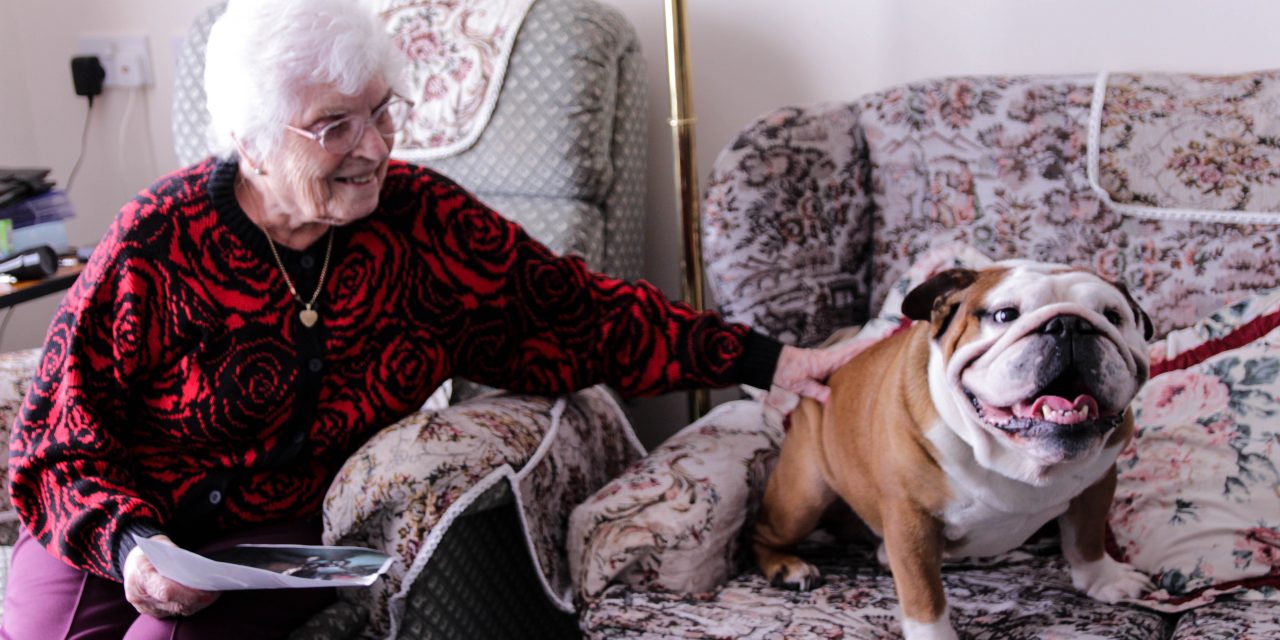 Tenants at Harriet Court care scheme in Lakenham, Norwich, had a treat today when Winston the British Bulldog made a visit ahead of preparations for his starring role in Legally Blonde The Musical at Norwich Theatre Royal.

The canine would-be-thespian went through a gruelling audition process held at Castle Mall on February 5 and won the chance to star alongside the human cast – Rita Simons (Roxy Mitchell in EastEnders), Lucie Jones (the UK’s 2017 Eurovision Song Contest entrant) and Bill Ward (Coronation Street and Emmerdale) – and the musical’s resident canine actor Bruiser the Chihuahua when the show arrives in the city from March 26-31. Winston will play Rufus, a dog belonging to Rita Simons’ character of Paulette.

Rhonda Dunthorne, part owner of Winston, is deputy manager at Harriet Court. The care scheme home has 40 flats, and tenants rent their flats from Broadland Housing while NorseCare provides on-site care to tenants.

Rhonda said: “I work at Harriet Court so some days Winston comes to work with me. There are tenants here who have had dogs all their lives but can’t have dogs now so they love to see him. It brightens their day and makes them smile. They make a fuss of him. He probably comes in once a month. He would come more if he could, but I obviously have to get my work done. I love musicals and love the theatre, so his role in Legally Blonde will be intriguing and something new.”

She thinks Winston will be fine on stage: “He’s good on the lead, good off the lead, so hopefully fingers crossed all will be well.”

Her partner and co-owner of Winston, James Madden said: “It’s going to be a massive experience. We’ve never done anything like this before. Winston will just want to go and meet everybody. He’s very calm, obedient and well-socialised and just loves people.”

Lots of time out and about socialising has all been part of the process of getting Winston ready for treading the boards during evening and matinee performances – and the tenants appreciated his efforts.

Betty Griffin, aged 88, has lived at Harriet Court for two years but sometimes feels lonely having lost her husband just before Christmas, so the doggy visits help brighten her day. “He comes into my room and jumps on my bed. He likes having his back tickled. I used to have little black poodles and bred them with my husband, so it’s nice when Winston comes in.”

Molly Gunton, 89, has been at Harriet Court for eight years and loves it there. “I just love it and living here is the best thing that has happened to me. My dad was a gamekeeper and I grew up with black labradors, so it’s nice to see dogs here.”

Peter Cawdron, 77, who has been at Harriet Court eight months, said: “He’s gorgeous, so friendly. I love all animals but I like them more when they are friendly.” While Pauline Scott, 86, has been at Harriett Court for a year. “I think Winston is lovely. I’ve seen the Legally Blonde film and I think it’s wonderful he is going to be in the theatre show.”

Some of the tenants are hoping to see the show and Rhonda and James have around 30 family members and friends who have booked tickets to see Winston on the stage.

Performances of Legally Blonde The Musical take place at Norwich Theatre Royal from March 26-31, at 7.30pm evenings with 2.30pm matinees on Wednesday and Saturday.