The sound of Music is renowned for compressing all aspects of life into one (very captivating and delightful) musical. From its well-known songs, relatable family characters and moments of love, to its historical and political elements, it certainly is a show for most ages. The audience was undoubtedly filled with a higher percentage of the older generation, yet I, being of the age of 17, did not feel isolated from the atmosphere and comedy of the show which is set in the late 1930’s.

During this time there was an Austrian family named the von Trapps consisting of seven children, their father Captain von Trapp and an inadequate nun named Maria, soon to be the governess of the seven loveable children. Based on a true story from a book that Maria herself published in 1949, the family were famous for their singing- which was a tradition with their late mother. However when she passed away the relationship between Captain von Trapp and his children, and not to mention music, evaporated from their lives which left a stern and emotionless household. Be that as it may, Maria, played by Lucy O’Byrne, eliminates the solemn tone with her cheery, creative and caring character. Despite having managed to ward off each one of their previous governesses before, the children are very fond of Maria. Likewise, their father has a similar affection towards Maria and the two find themselves falling in love… although Captain von Trapp is due to marry a Baroness and Maria is still a nun.

Throughout every scene Maria’s stage presence and pronunciation with every word, be it in a song or part of dialogue, was exceptional. Unlike many musicals today that have a heavy American influence with twisted American accents, The Sound of Music was almost quite refreshing with it’s typical British accents. To compliment Lucy O’Byrne’s well defined acting, her costume made her the uncanny resemblance of Julie Andrews which, with everything else, made the show feel warmly traditional. For these reasons alone she is my stand out character yet I could list many more.

I couldn’t possibly let you escape without mentioning the fabulous set that The Sound of Music designers have conjured up. Within my interval notes I have scribbled down ‘set is magnificent, grand, nobles, biblical, and incredibly intricate’ which describes it plain and simple. As parts of the musical are set in the Abbey, Mother Abbess’s head office, the Austrian mountains and different parts of the von Trapp’s house there were many sets and changes. Nonetheless each one was lined with great detail and lavish colour- but not an over the top sunglasses are needed sort of colourful. It was just perfect.

If you have young children then perhaps consider looking at another show because generally speaking I feel that it was aimed towards an older generation. However having said that, nothing was unsuitable within the show, just make sure they have a bit of background knowledge about the wonderful musical beforehand. Bar  that, anyone will find this musical which has a slight operatic flourish a treat to watch. 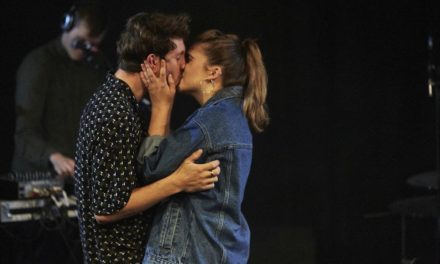