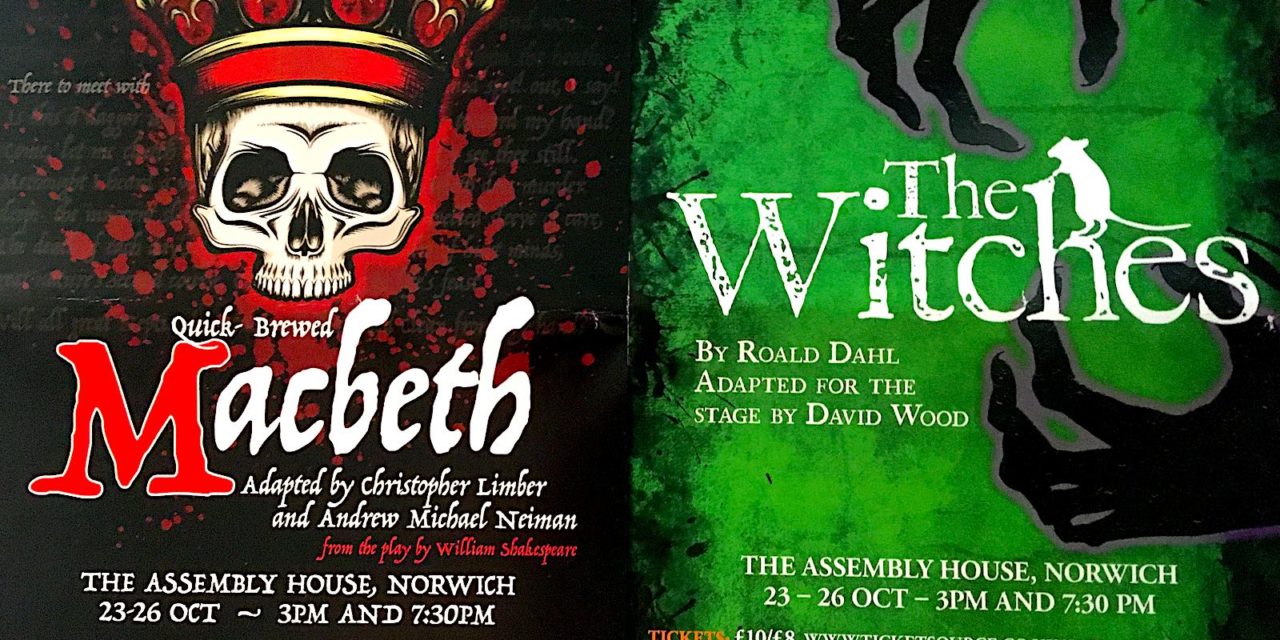 The ever ambitious Echo Youth Theatre have this week staged two productions at Norwich Assembly House and both achieve the high standards we have come to expect from this enthusiastic company.

The Scottish Play is an abbreviated version more properly titled ‘Quick Brewed Macbeth’. While this makes the play less of an undertaking for the cast and producers it does mean that we might miss some of the well-known scenes from the Shakespeare original, such as the Porter’s soliloquy. The witches take more of a role and are a regular feature on the stage. The play still has the full horror of the original tale of ambition leading to murder and madness, a tragedy on an epic scale drawn from the real history of Scottish governance. Things are slightly less murderous there now.

Harry Wilson is the youngest Macbeth I have ever seen, but he turns in a fine performance, carefully nuanced and well timed, and is equalled in these achievements by Morven Renfrew as a Lady Macbeth going from cold steel to tortured despair. The hard working witches are wonderfully played by Matilda Chitty, Posy O’Rourke and Jenny Nicol, who each also take on several other roles in the drama.

With a small cast of just nine the actors all work hard and each contribute to the wonderful atmosphere, enhanced by the Assembly House Noverre Room setting. A central cauldron bubbles away throughout, steaming misty vapours as the murder rate mounts.

An enjoyable and well presented Macbeth, this production should help younger audience members develop a taste for Shakespeare throughout their lives.

The second show is the Roald Dahl favourite ‘The Witches’. A sixteen-strong cast of mostly younger actors tackle this tale with great relish, giving us a show to enjoy from beginning to end. The perennial Dahl theme of empowered children tackling malevolent adults is strongly expressed in this lively tale. A young boy (played superbly by Isabelle Marrison) goes to live with his wise Grandma (Natasha Nudd) following the sudden death of both parents. He meets an irritating young lad called Bruno (Maisie Double-Crook) and together they spy on the annual get-together of the witches, who hate little children and plan to get rid of them all. The Grand High Witch is played with wicked gusto by Zoe Whiting, who I suspect rather enjoys this character. The rest of the cast all take turns as both witches, dancers and acrobats and all the other characters in the play. A notably enthusiastic performance comes from the effervescent Korben White as Witch number one.

The costumes, wigs and stage effects are all designed and executed at the high standard that Echo are gaining a well deserved reputation for. The witches all have to wear wigs and masks to hide their true evil, and hatch a plan to open sweet shops as part of their plan to get rid of all the children. In a nice detail the youngsters sell little tubs of sweets in the interval and before the show to the unsuspecting audience! The production balances music, dance and action well in a show which will hold the attention of the liveliest of children throughout.

This is a highly entertaining show from start to finish with a competent cast who all look as though they are thoroughly enjoying every moment of the show. Like other Dahl works the story contains some very dramatic themes and events, but the overall effect is warming and life-affirming and sees life from the positive outlook of children. We should all take some time out to enjoy this happy and fast paced show.

Listing:
The Witches and Quick Brewed Macbeth are at The Assembly House, Norwich, until 26th October. For bookings and more information go to: echoyouththeatre.co.uk