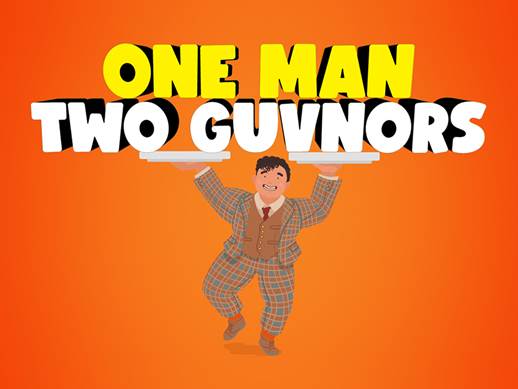 The last eighteen months have been impossibly difficult for those who bring theatre into our lives, and a bleak time for those of us who love the theatre. The Maddermarket Theatre is one of the things that makes living in Norwich just a bit better than anywhere else, so it was a particular pleasure to catch the opening night of their new offering, One Man Two Guvnors.

This farcical musical comedy was made famous in the National Theatre production featuring the multi talented James Corden in the leading role. It is written by Mr Bean – no really – Richard Bean, who has essentially adapted a 1743 Commedia dell’arte work by Italian playwright Carlo Goldoni. Set in Brighton in 1963 the play reflects the changing social mores of the time while having fun with the town’s reputation as both a home for ‘resting’ gangsters and a perennial location for a bit of frisky liaison making.

The central character amongst a diverse bunch is Francis Henshall, a recently sacked skiffle band player with a demanding appetite. Joseph Betts gives us a hugely energetic and entertaining performance as the hungry chancer Francis, including an on stage consumption of a frightening variety of comestibles. His two Guvnors are Rachel Crabbe (Lauren Bryant), pretending to be her recently murdered gangster brother Roscoe, and Stanley Stubbers (Nic Gordon), an upper class twit and public school survivor. In spite of the minor issue of murdering her twin Rachel and Stanley are lovers planning to flee to Australia, although not for the opera.

Roscoe was betrothed to Pauline (Emily Sidnell), the dippy daughter of another gangster Charlie Clench (James Treyton) but Pauline is in lurve with impossibly camp actor Alan Dangle, tonight memorably portrayed by Director Dan Smith. Francis needs to hide the fact of his dual employment from each of his two guvnors, and from this much nonsense ensues.

Introducing the play and popping up throughout are the talented six strong band with several perky tunes, with most members of the cast joining the musical offering at some point. They set the perfect mood to enjoy this light hearted romp, which has many moments of romance and tenderness to give balance to a laugh out loud script that is great fun. There is some interplay with the audience that adds to the enjoyment and leads to several unexpected moments and gives the cast a chance to show their impromptu skills, which are rather good. The characters are almost cartoon like caricatures, but every member of this cast gives them a depth and warmth that we can all enjoy. They display a staggering breadth of stage skills including classic slapstick from Francis and most notably Tom Davies as the cadaverous deaf waiter Alfie. Henshall’s pursuit of fish and chips is only topped by his ardour for Clench’s sultry book-keeper Dolly (Kate Pantry) who has almost had enough of men but may try one (or two) more just to be sure. Nic Gordon’s Stanley is a hoot, a Cabinet-ready buffoon of the highest order.

The colourful set is nicely designed and makes good use of the tight spaces in this delightful theatre. Every detail of the evening here reminds us that there really is nothing quite so good as a lively show, well performed by a talented cast. It is good to be back inside a theatre, and tonight at the end got this joyful show none of us really wanted to leave our seats and go home. Catch it if you can, tickets will be going fast! 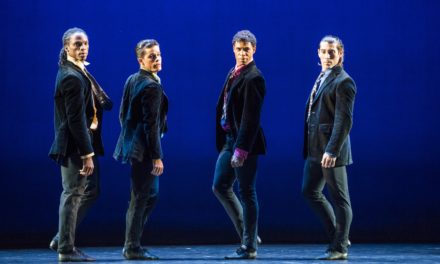