It is probably always good to be out of your comfort zone a bit.
I am not a fan of TV soap operas and the ‘starts bad, gets worse’ narrative line that all too often depicts the all too grim lives of poor families in the UK now. However accurate it may be in these times of rampant greed, and relentless deprivation.Blood Brothers draws on some familiar soap themes, and at least one of the cast has risen to fame through TV dramas.
But let’s look at a Blood Brothers a bit more closely. This musical stage drama is written by Willy Russell, creator of famously strong women’s roles like (Educating) Rita and Shirley Valentine. The central role in Blood Brothers is Mrs Johnstone, a similarly strong character who never achieves the uplift that Rita and Shirley do.
Class and the predetermination of life consequent upon class background are at the heart of this story, which is told in the never-emotionally-understated idiom of Liverpool language and mores. If this all seems a bit grim then yes, it is. But like so many stories that emerge from this distinctive community it is also full of joyful life, strong family bonds and a Catholic relationship with pleasure.
The story is the life of Mrs Johnstone, played with skill and balance by Lyn Paul, who has been praised as the definitive interpreter of this role. It is not hard to see why, as she creates an utterly memorable and moving character, a woman wanting a simple happy life but thwarted at every turn. Expecting her seventh child she is deserted by her husband, but works to support her family. The seventh turns out to be twins, and fearful of losing the children to social care she agrees a Faustian pact with her rich childless employer Mrs Lyons (Sarah Jane Buckley) to give her one of the twins.
Key factors in this tale are a hefty measure of Catholic guilt, a dangerous belief in superstitions and a depressing inevitability of class determining life chances.
When we have been made thoroughly miserable by this tale of despair writer Willy Russell breaks through with some delightful vignettes of growing up in working class Merseyside. The depiction of the young kids is particularly entertaining, not least as seeing adults acting out the lives of exuberant nippers is always going to be fun. The separated twins meet by chance and Mickey (Sean Jones) who stayed with his birth mother becomes ‘Blood Brother’ with Edward, or Eddie (Mark Hutchinson), who has been raised in the comfortable affluence of the dysfunctional Lyons family. Needless to say this causes ructions all round. The interplay between the two brothers who do not know they are brothers gives much of the most poignant content of the play.
Into this mix comes childhood sweetheart to Mickey Linda (Alison Crawford tonight) who becomes an inseparable part of the twins teenage adventures.
It would take the stoniest of hearts not to be moved by the story of Blood Brothers, and there is drama and tragedy aplenty as we reach the climax that has been set out from the start. But it is a hugely entertaining play, and has unsurprisingly been filling theatres for over thirty years. It has a message more relevant than ever to a Britain where class and money divides people increasingly far apart in a deeply unequal society.
The stars of this production are clearly familiar with it, but never complacent and an ideal cast for the clever writing. It is noisy, and musical. The music may sometimes seem intrusive, but is representative of the heart of this story where icons like Marilyn Monroe are the unattainable dreams of people who have lives with no option for glamour. Icons for the masses, bread and circuses but never forget your place.
It is a very physical production with song, dance and drama throughout and some fun with character swaps and quick changes from this capable cast. As the narrator (Dean Chisnall) himself says at the end, this tale is all about class, and how it determines our life chances. The links between poverty and crime are highlighted by Mickey’s elder brother Sammy (Danny Taylor) who drags the whole family into a shady underworld of violence.
In spite of the dark theme and difficult subject matter this is still an uplifting show that reminds us of the strength of the human spirit as much as its weakness. It has been staged hundreds of times, but you will struggle to find a better cast than the current Norwich Theatre Royal presentation of this classic show.
© Julian Swainson 2017 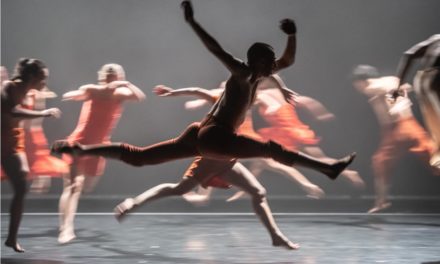 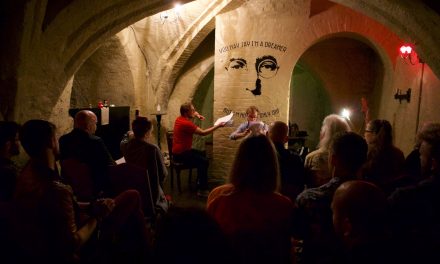