Omid Djalili – photo supplied by Theatre Royal
A packed Norwich audience turned out on a chilly Sunday evening to give a warm welcome to Omid Djalili and his support act Boothby Graffoe.
Graffoe is tall and shambles onto stage with guitar, used to play short songs as part of his routine. He made much of the recent news of a large consignment of cocaine being handed in to police after washing up on the Norfolk coast. While he appeared convinced that some community shareout of some of this must have occurred I think most of this Norwich audience were laughing politely rather than sharing his enactment of the relish of cocaine use. Graffoe (who also writes for Djalili) finished his short set to yield to an early interval before we greeted Omid Djalili.
Omid Djalili is a stocky figure, an English-born Chelsea fan from Iranian parents who bases much of his comedy on popular attitudes to race, diversity and faith issues. On stage for nearly two hours he holds the audience throughout, with great energy and perfect timing. His background as an Iranian Bahá’í gives him an interesting perspective on different faiths, and he makes some interesting comparisons between different faiths’ tolerance of satire or humorous comment, suggesting for example that Jews are far more tolerant of such levity than Muslims, although I suspect such generalisations are rather sweeping. Even the title of this show and tour, ‘Schmuck for a Night’ is a self effacing reference to Jewish humour and his own humility.
Like many a good comedian Omid Djalili manages not to be offensive by seeking to offend a wide range of people throughout his show. This will always be a delicate balance, but Omid succeeds. He has a pop at the Finnish language, and all of Malta and has an hilarious imagined dialogue between grumpy neighbours Nelson Mandela and Desmond Tutu, with uncannily accurate accents.
At the end of some particularly ‘belly laugh’ jokes music suddenly booms out and he performs his energetic and lewd ‘fat boy dance’ – a kind of reward for audience appreciation.
There is a running theme throughout the show about recognising and owning past mistakes – his own, and other larger ones such as Brexit. He portrays accurately the stiff upper lip British attitude: “I’ve made my decision and I’m sticking to it”, and takes this through to the unforgettable image of a parachute jumper whose main ‘chute has failed, being urgently told to deploy the emergency ‘chute: “I’ve made my decision and I’m sticking to it”. His message to post referendum Britain could not be clearer.
He tackles many current issues, including ISIS and the Western reaction to it. He presents a rational alternative to the current macho male response to Islamic terrorism based on the real fears and attitudes of those fighting this Jihad, and like much of what he says it makes a lot of sense.
Omid Djalili is quick, intelligent and effortlessly charming but behind the sometimes acerbic wit there is a kind and gentle human being who leaves us in little doubt about how to make our world a better place. He is towards the end of a long tour, but worth making the effort to catch if you can.
©Julian Swainson
Read more here: http://www.omidnoagenda.com 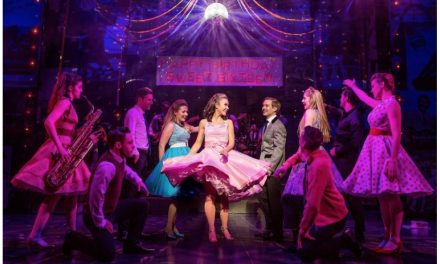