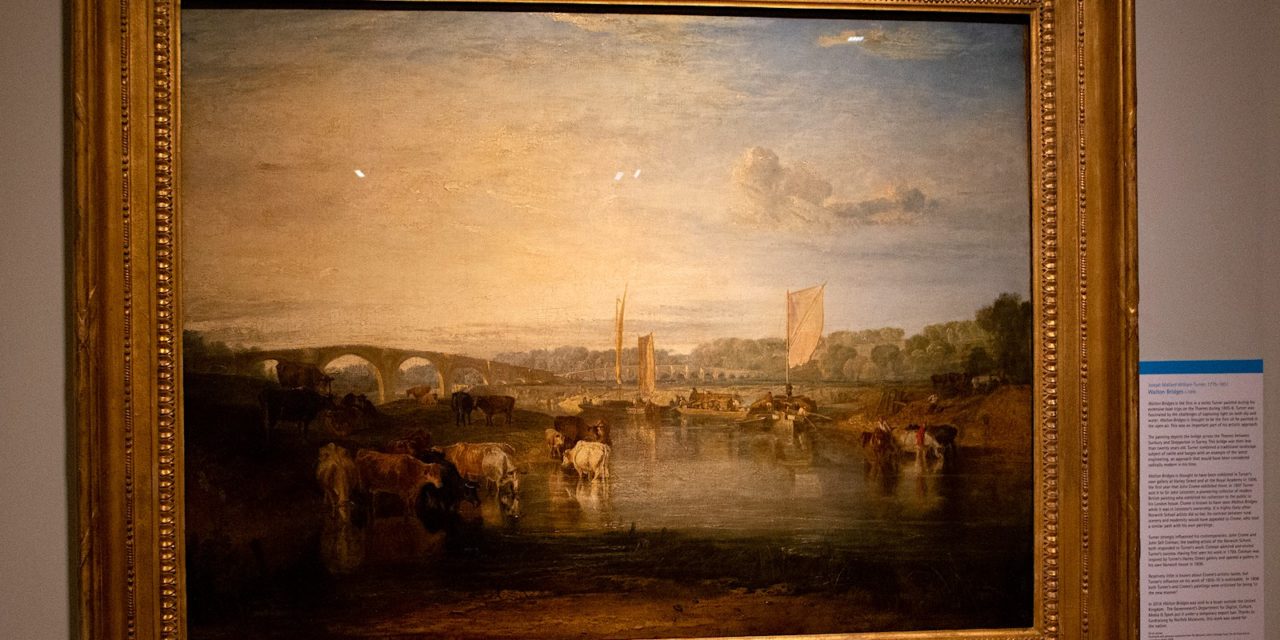 Members of the public will have the chance to view this magnificent oil painting alongside masterpieces by John Sell Cotman and John Crome from the Norwich School of Artists who admired and were influenced by Turner (see attached image sheet).

Norfolk Museums Service led on the fundraising campaign to secure the painting, partnering with Colchester and Ipswich Museums to create a wide-ranging and imaginative four-year programme of exhibitions, learning and public engagement across the region.

The magnificent oil painting, sold at auction at Sotheby’s in July 2018, was subject to a temporary export deferral, in recognition of its immense cultural significance to the country.

Thanks to generous and timely support in the form of major grants from The National Lottery Heritage Fund and Art Fund, this important early Turner has now entered public ownership where it can be enjoyed by generations to come.

The acquisition, highly unusual for a regional museum, is the first Turner oil to enter a public collection in the East of England – specifically Norfolk, Suffolk and Essex – where it complements existing holdings of important British landscape paintings by the likes of John Constable, Thomas Gainsborough, and the artists of the Norwich School, including John Sell Cotman and John Crome, for whom Turner was an important influence.

The fact that Walton Bridges, which dates from 1806, is believed to be the first oil by Turner to be painted in the open air – a practice which was to become an important element of his artistic approach – adds to its significance.

From its arrival in the region, the painting will be the focus of exciting learning programmes across the East of England curated by diverse groups from various communities, with young people a particular priority.

For Norfolk Museums Service, the painting will be an important focus of their Kick the Dust programme, a youth engagement initiative, funded by The National Lottery Heritage Fund, which aims to work with over 8,000 11-25 year olds who face barriers to participation in arts and heritage.

At Colchester and Ipswich Museum Service, plans include a ‘Schools Month’, offering free day-long workshops to explore the Turner painting and experiment with art techniques, led by a local artist and projects with Suffolk Family Carers and Suffolk Family Focus, which is part of the Department for Work and Pension’s Troubled Families Initiative.

Anne Jenkins, Director, England: Midlands & East, The National Lottery Heritage Fund, says: “Saving the wonderful Walton Bridges for the nation and providing the East of England with their first Turner to enter a public collection is an initiative we’re very proud to have funded. Thanks to £2.1m raised by National Lottery players, the people of Norfolk, Suffolk and Essex will be able to enjoy this inspiring art work on their door step, as it tours around the region. It’s also fantastic news that the painting will be a focal point for Norfolk Museums Service’s National Lottery-funded Kick the Dust programme to break down barriers, and encourage thousands of young people between the ages of 11-25 in the area to engage further with arts and culture.”

Stephen Deuchar, Director of Art Fund, said: “This is a landmark painting representing a pivotal moment in the career of one of Britain’s most celebrated landscape artists. We are immensely proud to have helped save this important work – the first Turner to join a collection in the east of England, where it will now be enjoyed by a wide public from Norfolk, the UK and beyond.”

Cllr. John Ward, Chairman of the Norfolk County Council Joint Museums Committee, says: “We are hugely grateful to The National Lottery Heritage Fund and Art Fund for supporting so generously our bid to save this remarkable painting for the nation. The campaign was also generously supported by a private donor. We believe we’re uniquely placed to share the story of Walton Bridges with the public: Turner’s influence on a number of artists associated with the region and represented in its collections, including John Constable, Thomas Gainsborough and the artists of the Norwich School, make it a natural home for the painting. The partnership between Norfolk Museums Service and Colchester and Ipswich Museum Service will draw out these fascinating connections while an extensive community engagement programme will ensure as many people as possible have a meaningful encounter with this wonderful work.”

Cllr. Julie Young of Colchester Borough Council and Cllr. Carole Jones of Ipswich Borough Council say, ‘We are delighted to have played a part in saving this beautiful painting for the nation and are grateful to The National Lottery Heritage Fund and Art Fund for supporting the project. We look forward to working with our colleagues in Norfolk to bring the painting to large audiences throughout the East of England. It will have a catalysing effect on bringing attention to the other wonderful artworks on display in our museums in Norfolk, Essex and Suffolk.’

The painting, which measures 92.7 x 123.8cm, shows the double-span bridge that ran across the Thames between the locks at Sunbury and Shepperton in Surrey. It is understood to be the first Turner oil painting completed in the open air and followed his move to Sion Ferry House in Isleworth in 1804/5. The piece led to a major series of Thames river scenes which Turner painted during extensive boat trips along the Thames during 1805-6. Turner was fascinated by the challenge of capturing the effects of both sky and water throughout his career. He would frequently sketch and paint while onboard a boat to experience the environment as closely as possible. Eighteen oil sketches, housed at Tate Britain, survive as a result of the trips Turner undertook during this period.

The subject matter of Walton Bridges captures a pivotal moment in time: the beginning of the industrial revolution. The artist contrasts traditional rural scenery with more modern commercial activity. Walton bridge itself has undergone significant changes. The bridge shown by Turner appears traditional to modern eyes but was completed less than twenty years prior to this picture. It replaced an earlier bridge which had collapsed, immortalised in a painting by Canaletto in 1754, now in Dulwich Picture Gallery. By the 1850s, the bridge portrayed by Turner was itself to collapse. Today, Walton has a new steel bridge. Turner’s painting acts as a signpost to the artist’s appreciation of history, change and modernity.

The acquisition of Walton Bridges fills a significant gap in the collections relating to British landscape painting in the East of England. Norwich Castle Museum & Art Gallery, Norfolk Museums Service’s flagship site and the painting’s permanent home, houses the finest collection of work by the Norwich School Artists in the country, including work by the leading British masters John Sell Cotman and John Crome.

Turner’s work was deeply influential for these artists. His approach was ground-breaking at the time: painting directly from nature, expressing its reality, intensity and drama, while exploring human interactions with the natural world. His example inspired the Norwich School artists who also sketched ‘en plein air’ in an attempt to immerse themselves in the local landscape.

Turner has been the missing link in Norwich Castle’s exploration of the influences on the Norwich School. With a major loan exhibition to mark John Crome’s bicentenary in 2021, this is the perfect time for the painting to enter the Norfolk Museums Service collections.

The acquisition of a Turner for the East also complements the collections of Colchester and Ipswich Museums which tell the story of the significant British landscape artists Thomas Gainsborough and John Constable. Although Turner and Constable were rivals they, together with Gainsborough, were crucial to the development of landscape painting in Britain. The placing of Turner’s work alongside these will allow this story of visual artistic interchange to be told more fully, placing the East Anglian region properly within the British national context.