Will 2017 be the year you volunteer in Norfolk?

CFRs attend medical emergencies where they live or work

More than 300 people did it this year.

Could 2017 be the year that you volunteer?

And service bosses are urging those interested in helping patients in their community to sign up and join the almost 300 CFR groups in the East.

Steve Catley, Lead Community Collaboration Manager for EEAST, said: “New Year is a time for making resolutions and setting goals for the forthcoming year. By becoming a CFR you will be joining a big family of life-savers and will be making a vital contribution to your community and the ambulance service.

“We are privileged to have so many dedicated CFRs who give up a lot of their time to volunteer. However, you can still make a difference if you can only spare a few hours a week.”

First responders are trained by EEAST, usually over a weekend, to respond to medical emergencies including cardiac arrests, patients with chest pain, breathing difficulties, allergic reactions and diabetes emergencies.

Because CFRs volunteer where they live or work, they often reach a patient before the arrival of an ambulance clinician. Every second counts when someone is not breathing and CFRs are trained to do cardiopulmonary resuscitation (CPR) and carry defibrillators.

For more information about becoming a CFR and opportunities to become a volunteer car driver or Trust User Group member, visit http://www.eastamb.nhs.uk/join-the-team/community-first-responders or see our 42 second animation at https://www.youtube.com/watch?v=RdWE2v8_3yc

Shauna Tate joined Thetford CFRs in 2016 after her son was treated for sepsis earlier in the year. She tells her story in this new video https://www.youtube.com/watch?v=cqKdMoGiaPg

Here are a couple of blogs from our Norfolk CFRs 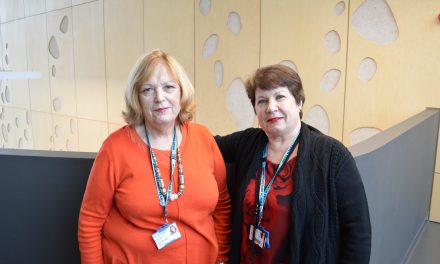