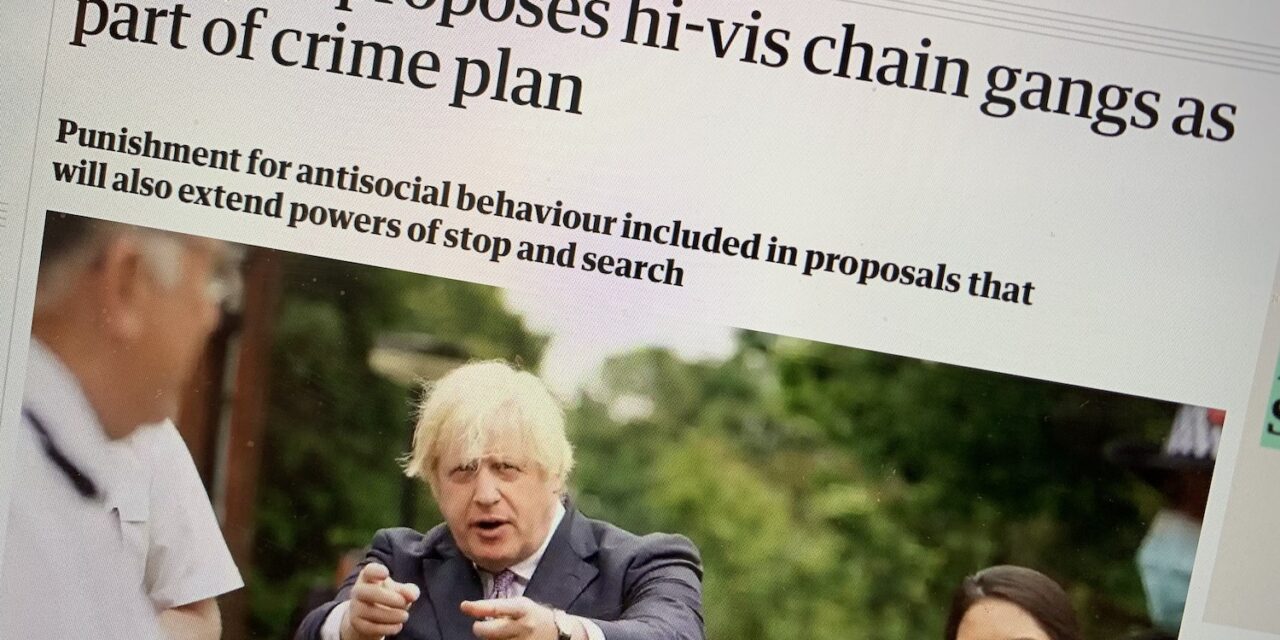 A screenshot of the Grauniad treatment of the proposed new penalties. Do subscribe to them, much better than this drivel.

Our editor has been musing about crime and punishment following the PM’s announcement of new community based penalties. He has some proposals, but they may not be entirely serious. Warning: satire!

The Conservative Party can be relied upon to put their brightest minds on to the tricky task of finding yet more new ways to hurt, demean and discourage people. Obviously they are severely hampered by the fact that their brightest minds are still, well, quite dim. But they have managed to fire up a few column inches and Twitterbates with their latest plan to dress miscreants in high vis clothes and make them pick the crisp bags and bottles of piss from roadside verges.

For once, perhaps they have an idea worth extending a bit. So in a spirit of genuine helpfulness I am going to suggest a few more practical modern punishments for proven lawbreakers which really give the rule breakers a chance to reflect upon their misdemeanours and become better people. So here is my little list of ten offences and suggested paths to redemption.

Speeding drivers: these troubled souls always think their wits are sharp and their risk response above average. Let’s test that out by getting them back on the highway, with a mop and bucket, cleaning all those dirty signs they might have missed reading, polishing those lovely bollards and generally making our highway system spic and span like it hasn’t been for years. We could even give them a tabard proclaiming ‘I do it quickly’ or similar.
Graffiti taggers: creatures of the night and dark places, let’s harness their talents positively by giving them a litter picker and a black bag and sending them out on our busy night-time streets to collect all the discarded bits of pizza box, kebab salad, burger wrapping and lager vomit that so liberally coat our city streets. Competitive ones will enjoying fighting the seagulls for first pick at the scraps, and when the last pissed up reveller straggles home at dawn their work can be checked and the daubing miscreants allowed home tired but satisfied.
Drug dealers: these hardy folk have unrecognised logistics skills, but lack adequate management supervision. So pop them on a twelve hour Amazon night shift, where their every move will need to be monitored and focused on keeping those brown cardboard boxes moving. No need for meal breaks or toilet trips, these guys know how to keep going all night, and after a couple of months they will never want to play ‘pass the parcel’ ever again.
Bullying ministers: I know, standards in public life should mean this never happens, but sadly it does and has cost us a huge victim payout. I think you know what we are talking about, Home Secretary. So let’s get her empathy juices flowing, maybe for the first time ever, with a key role for bringing new talent to the UK. We need a brave but kind soul to take the rope out to those sinking overloaded dinghies full of desperate refugees in the channel so they can be hauled to safety and a warm Kent welcome. Give her a kayak, a paddle and a long bit of string and I am sure she will soon be reeling in those dinghy denizens with a new sense of purpose. Never mind the stormy weather, a bit of determination should see the job done and a whole new satisfaction in doing something nice for the first time ever. And even if the kayak tips over her new laws mean that she won’t be bothered by pesky lifeboatmen trying to ‘save’ her.
Failing ferry ministers: it takes a special lack of ability to try and set up shipping companies without any boats, so for one ex minister we need something that really shows him what a solid ship is like. So when a vessel comes into dry dock all wet and messy the first job is to clean the bottom and scrape all those bits of barnacle and seaweed away so the painters can refresh the ocean going beauty. It does mean getting wet and filthy, but a Tory MP has been to private school so will know worse. For the man who privatised probation officers we would of course have to hire a Serco consultant to monitor his performance and make sure his achievement excelled expectations for the first time ever. A discrete cattle prod will be needed for this.
Fibbing far right pundits: we have all heard a bit too much from these intolerant gobs over the last decade, even the BBC still drags them out from under their stone to energise the knuckle draggers. So let’s make the best of their need to be seen, but remove their chance to be heard. Nothing beats a good shopfront display window, and what better than live models? A twelve hour shift proudly filling the latest Y-Fronts or Lederhosen products should be just the job for these attention seeking hatemongers. Female and just deported from the colonies? Modelling a nice burka in a sunny shop window could be just the ticket home for you! Once again, some monitoring to ensure non movement and a fixed smile, where visible, could easily be provided at competitive cost by Group Four guards or similar. A nice solid shop window will ensure they can never be heard by passers by. A month in display post for every single TV appearance seems reasonable. 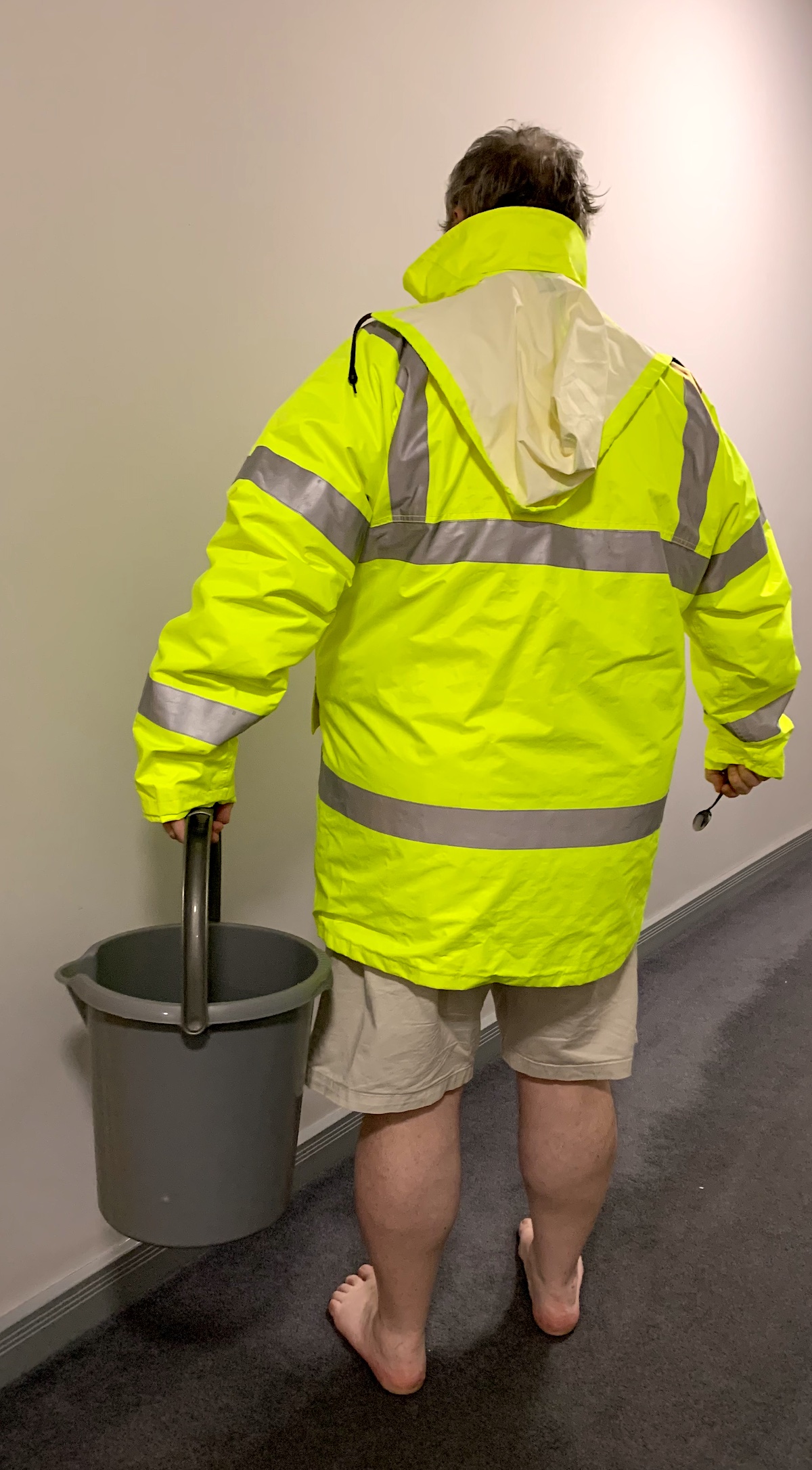 This banker has his spoon ready! © The Eye Snapper

Bailed out bankers: these chaps just love quantifying stuff, usually your money that is mysteriously now all theirs. So let’s get them doing something really useful and set them to work down the pipes clearing away those pesky fatbergs. They would have to bring a teaspoon or two from their own private monogrammed tea-sets, but we could lend them a bucket, so that they could really get a good count of how many teaspoons of lard and hair composite really fills a five litre bucket. An invaluable statistic. A sewer day a week for every £100 of taxpayer bailout should concentrate those counting braincells a treat.
Over-charging estate agents: these second sons and daughters of the old wealthy families know the price of everything, but are a bit rusty on values. So let’s give them a second hand sleeping bag between them and get them to test out the safer and more dangerous rough sleeping spots in our towns and cities so they can help expand the life choices for people they have helped to make homeless. Each could be given a tiny bit of cardboard just big enough to write ‘former estate agent, please be generous’ to help with a bit of real life begging practice. In a few nights they should manage the deposit on a cup of coffee.
Hypocrites in government: we all know how hard it is to be a minister or special adviser in these tough times. All those complicated new rules to invent to persuade the Covid victims that it is all their fault. And now people don’t believe you! So for all of you that set down these complex rules, but never thought to follow them yourselves, we need a special kind of discipline. Time to give the hard pressed NHS workers a well earned break, we are going to get you cleaning the bodies of the Covid casualties and moving them to the mortuary. You will learn to show respect for those you have so clearly let down, even if it is far too late. And for the ‘drive to Barnard Castle to test my eyes’ excuse a special extra duty, we need to give our hard pressed grave diggers a bit of a holiday so get your shovel and get cracking. About 150,000 fresh graves should match the extra work that your collective mismanagement has caused.
Lying Prime Ministers: a very special category needs a very special punishment posting. In these troubled times where the chaos of Brexit means our former dominion Ireland has definitely got the initiative I worry that our emblematic outpost of Rockall could be under threat. It is time to start a permanent occupancy of this rocky Atlantic prick. Who better to be resident warden of the rock? Not really much room for anyone else on top, so a photo of ex mistresses and dog would be allowed, although there won’t be room for snaps of all the kids sadly. A one man tent should cut the breeze a bit and just about fit the top, and a weekly delivery of beans, bangers and Iron Brew would be a kindness, weather allowing. I think a week of Rockall residence for every fib ever told should keep this postholder in place for a good decade, with the added bonus of feeling that he is doing something useful for the first time in years. We know he likes enabling donors so I think after the first decade in residence he should be offered the chance to buy the honorary title of Lord Warden Protector of Rockall Rights and Guano, subject to remaining in the location. This would not be an hereditary title, and he would no doubt become a thoughtful Remainer. 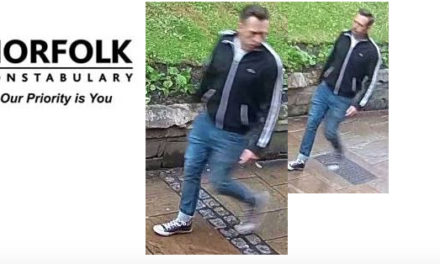