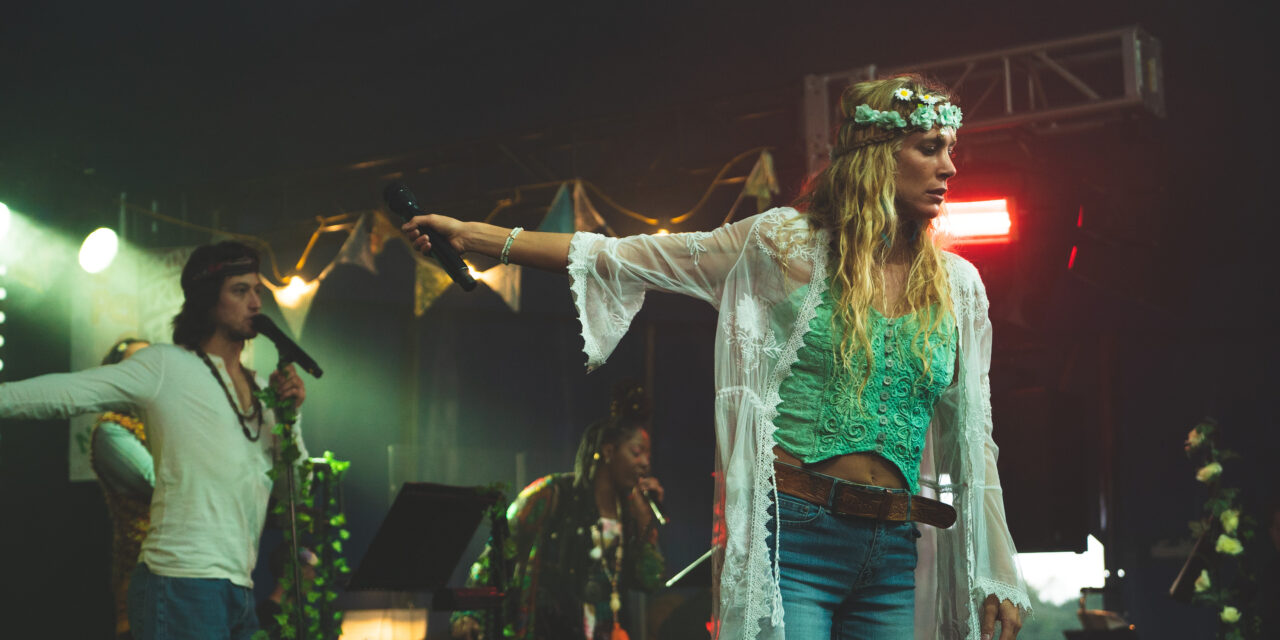 The relatively balmy summer that Norwich has enjoyed has allowed us to enjoy many fine live performances in the big top tent over the past few weeks, the only show in town thanks to the frankly barmy restrictions placed upon the arts by this government. The tent has moved to UEA, set in the grassy slopes right next to the emblematic ziggurat student flats.

If you are not familiar with UEA, and perhaps even if you are, give yourself plenty of time to find your way to the big tent. Because you must go and see this final fling of Interlude excellence. There are just three more shows, two on Saturday and one matinee on Sunday, then it is time to pack the tent and head for home.

I have never seen Hair before, and was perhaps a little wary of its happy hippie peace and love message that was shockingly relevant in 1967 when first performed against a context of hundreds of young American men too poor to dodge the draft being sent off to a bloody and pointless war in Vietnam. This version, directed by Strictly favourite Arlene Phillips, is a reduced ‘concert’ version of the original ambitious musical which suits the stage and duration constraints of the Covid-safe Theatre Royal Interlude tent offer, with an 80 minute limit and no interval.

The bright lights of the big top sparkle through the October mists rising from the UEA broad nearby as we sanitise and separate into our carefully spaced seats. With the sides staying open this is a decidedly chilly experience – take a blanket, hat and gloves. There are hot drinks and a bar before you sit if you need refreshing.

The music stands on stage suggest a show freshly adapted to its circumstances and I could not help wondering how the fabled nude scenes might be achieved without putting the cast unduly at risk. The reduced staging actually allows the show to concentrate on the songs and music, and we are rewarded with an excellent cast all at the top of their game. The eight strong cast were all great singers and covered between them many extra roles to their own characters as members of ‘the tribe’ of friends young enough to be focused just on living and loving. Hair celebrates that halcyon period between the arrival of the contraceptive pill and the emergence of AIDS when promiscuous sex was almost normalised for younger people, to the blustering outrage of the American religious right and other festering outbreaks of intolerance.

The story, such as it is, revolves around the dilemma for Claude (Jordan Luke Gage) when he gets his draft papers to join the military. He shares the dilemma with room-mates George Berger (Matthew Croke), a stoner, and Sheila (Jodie Steele), a hippie chick bedecked in flowers. The music starts with a powerful rendition of the familiar ‘Age of Aquarius’ from Dionne (T’Shan Williams) and every cast member has their moment in the limelight as the songs come one after another. Sophie Isaccs plays the pregnant Jeanie, yearning for Claude, while Frances McCann who we last saw as Eponine in the sadly truncated run of Les Miserables just before lockdown plays Crissy, who seems to have lost her boyfriend’s address. The ‘militant African-American’ Hud is played by Layton Williams looking as if he just stepped out of a Blaxploitation classic, while Cleve September completes the cast as Woof, inexplicably doubling as a girlish voiced Margaret Mead. Look her up. Every one of the characters on stage have thoroughly rejected the values of their parent’s generation – they are all about free love, lots of sex and drugs and no bourgeois constraints of race, religion or class. Although it is America so they are quite keen on money. Any of the UEA students enjoying the show on their doorstep might want to reflect that they are looking at how their parents, and indeed grandparents, may well have behaved.

Will Claude bite the bullet and get shipped off to ‘nam? Will they all find true love and happiness in a new fair and free world? Will the cast get chilblains? All will be revealed if you get yourselves to the tent for this sparkling show. But what I can reveal now is that this show is great fun, superbly performed, and once again a tonic for these miserable times that we are living through. As we go to press there are just a few tickets left, so get on the blower to the Theatre Royal and book yourself a seat for this lovely little musical offering.

HAIR The Musical: An Outdoor Concert is at INTERLUDE@UEA, UEA campus, on Fri 9th & Sat 10th & Sunday 11th October.
Tickets are available online at norwichtheatre.org or via Norwich Theatre Box Office on 01603 630 000.