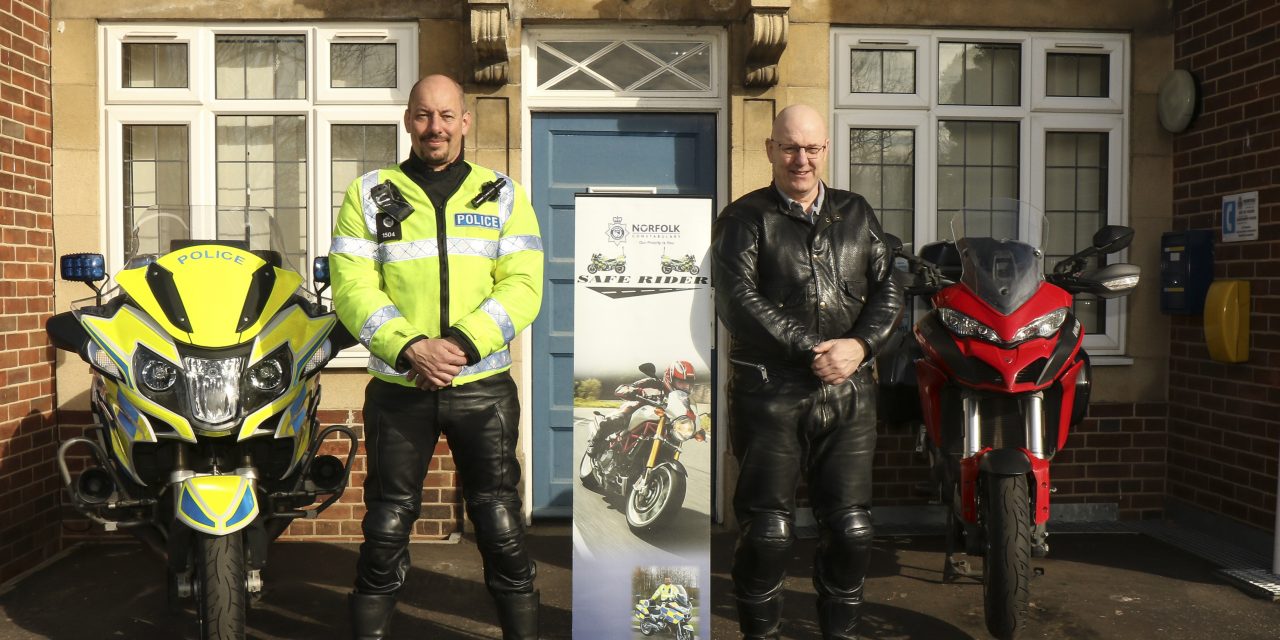 Twenty years since the launch of Safe Rider, Norfolk Constabulary and Norfolk County Council are celebrating its continued success.
The course, which has seen more than 3,000 people attend, aims to reduce the number of motorcycle casualties across the county by educating riders on how to become better, safer riders.

The workshops, which comprise of a two-and-a-half hour evening session and a five hour road session, run from April to October, the months when it is considered more motorcyclists take to the roads in the warmer weather.

The workshops are aimed at all fully qualified riders (either full A or A2 categories) who want to improve their skills to become better and safer riders.

The sessions are relaxed and informal.

The underlying message of our workshops is that education is the key, not enforcement. In a conflict free environment, riders will be introduced to the police road craft system – the corner stone of police riding.

The workshop provides individuals with professional advice and confirms their strengths and identifies their weaknesses as a rider. During the road session you will receive a demonstration ride by a police rider and there will be an opportunity to have your riding assessed with written feedback. Options for further skills enhancement will be outlined at the conclusion of the course.

Chief Inspector Kris Barnard, head of the Norfolk and Suffolk Roads Policing Unit, said: “Reducing the number of people who are killed or seriously injured on the county’s roads remains a priority for us and sadly the statistics speak for themselves that each year a high percentage of those killed on our roads are motorcyclists.

“The underlying message of the workshops is that education is key, not enforcement. The workshops give motorcyclists greater awareness of the hazards they may face when out and about to help them become better and safer riders.”

Norfolk Constabulary has a dedicated team of police motorcyclists – the Road Casualty Reduction Team (RCRT) – who carry out proactive patrols across the county, targeting vulnerable road users and collision hotspots. The team is funded by the Road Safety Camera Partnership and provides additional support to routine patrol deployment.

Police motorcyclist, PC Andy Lawer, from the RCRT, said: “The majority of riders are very sensible but we see some unbelievable things with people taking very serious risks. In the first two months of this year we have had a significant increase in serious injuries to riders, compared to the same period last year. We will be out there providing a visible presence and deterrent this summer.”

Motorcyclists can also opt to take part in the Hugger’s 1:1 Skills Session, 2 hours of bespoke training conducted at a mutually convenient time. This is often taken in either in addition to Safe Rider or as an alternative.

Andy Micklethwaite said: “All road users need to work together to reduce casualties. Car drivers need to ‘Think Bike!’ and take more time to look out for them. Motorcyclists are easy to miss and easily hurt.

“Motorcyclists need to ride defensively and avoid risk taking, about 25% of all motorcycle crashes involve no other vehicle. Additional training or assessment is key to improving rider’s ability and awareness, not only sharpening your skills but better preparing you for unexpected hazards on the road. Riders will also get more from their bike and have more fun in a safe and smooth manner without being boring and without taking any risks.”

Enquiries for Safe Rider or Hugger’s 1:1 two hour bespoke Skills Session (both £50) should be directed to roadsafety@norfolk.gov.uk or 01603 638115. For more information including some valuable rider skills downloads, check the website www.think.norfolk.gov.uk

The first ride out will be on Sunday 15 April 2018. Assistant Chief Constable Paul Sanford will be presenting certificates to those taking part.