Iurie Gisca as Nabucco – photo supplied
Many a parent has gone through a period of some frustration with a wayward daughter or son but Nabucco seems to have had a bit more reason than most to feel let down by his daughters. Verdi wrote this crucial third opera just after the death of his wife and two children and the critical dismissal of his second opera, and seems to have been in the mood to allow a few strong and simple emotions to dominate this new work.
Of course this is an old story with a simple theme that could not happen now, two near neighbours in the Middle East having a bloodthirsty conflict over religious differences and the character of their leaders. Call them Assyria and Israel, couldn’t happen now could it… Oh. Yes this is an eternal theme and we don’t seem to have progressed much.
The Director and Producer of this enthusiastic production is Ellen Kent, with whom I enjoyed a wide ranging chat in the interval. Born to the British High Commissioner in Armednagar, India and spending her early years in Mumbai (then Bombay) she soon found herself in boarding school in Cromer, which she assures me she rather enjoyed. Ellen is not in the business of making dull serious operatic productions, indeed she has a reputation for earthy glamour and spectacle. Her production has a Bollywood level of colour and setting detail.
Nabucco is a broad-brush full-on rollercoaster of an opera, and this production brings the brash drama and pathos-laden human story to life with colour and spectacle and powerful storytelling. The Hebrew people have been conquered by their neighbouring Assyrian king, Nabucco. He is clearly rather taken with his success and determines that all gods are false but Nabucco himself, which brings the inevitable thunderbolt down on his rather surprised bonce.
Meanwhile one daughter Fenena held hostage by the Hebrews falls for her captor Ismaele and their relationship gives a running sub plot to events. Nabucco’s other daughter Abigaille wanted Ismaele for herself and proves to be a rather bad loser bringing a suitably operatic dose of revenge to proceedings. Along the way she finds that she is not a true daughter but the adopted offspring of a slave – this realisation does nothing to lighten her mood or weaken her murderous intent.
For a large part of the show this is Abigaille’s party, and looks set to end with an operatic dose of murder and revenge as she supplants her father’s rule and authority. In the end though, the body count is much the same as Mike Leigh’s more contemporary Abigail as redemption stays the sword bearing arm.
Just as the plot offers a wry comment on our lack of progress in international relationships the casting of this work highlights the utter cluelessness of the ‘one in one out’ contemporary racists. Ellen Kent has assembled a cast from nations across the world, many from Eastern Europe and bits of the old Soviet Union. The orchestra is from the National Opera and Ballet Theatre of Moldova. Tonight’s Nabucco was Iurie Gisca from Chisinau in Moldova with Abigaille performed with passion and power by Olga Perrier from France.
Mezzo-soprano Zarui Vardanean comes from a Viennese scholarship to the role of the lovelorn daughter Fenena while the impressive baritone Vadym Chernihovskiy from Odessa has a huge stage prince as the Hebrew High Priest Zaccaria. The singing from the principals does full justice to the beautiful and memorable Verdi score – above all this opera is a platform for some fine composition.
The choir looked a little less rehearsed to me but still brought a tear to my eye as they brought the Chorus of the Hebrew Slaves to us.  The staging matched the strong and simple themes of Verdi’s work with a colour coded costume set that gave us the downtrodden Hebrew masses in blue rags, compared to the bold and bright uniforms of their Assyrian conquerors.
The show is helpfully surtitled to help us keep up with the plot if our Italian is lacking. I rather enjoyed some of the rather arch if accurate translation of the ponderous phrases of the original Temistocle Solera Libretto.
The conventions of opera demand that we suspend our disbelief in many ways – real executioners seldom break into song as they raise their body axes. So the acting is rather, well solid, and many scenes look as though they are enacting a slow motion film of the grisly reality of the tale. Some more modern producers go to great lengths to bring more movement and life to the operatic stage but Ellen Kent is happy to bring us a traditionally paced if very gaudy show. Her productions fill stages across the world and often succeed in bringing the art of opera to a new audience, as they keep costs under control with smaller casts, often as tonight including a few local stage school children, and a clever circular set that focuses attention on centre stage action.
Regardless of any quibbles I may have about staging or acting this is a joyous production that gives us an opportunity to appreciate Verdi’s wonderful score. The music is the point, and with this orchestra and a fine set of principal singers you are guaranteed a memorable experience. Don’t miss Aida tonight.
©Julian Swainson
Tonight’s listing:

Aida, Wednesday 10 May at 7.30pm. Tickets £8-£36.50. Discounts for Over-60s, Under-18s and Groups. Sung in Italian with English Surtitles. Please note surtitles are not visible from Stalls seats in Rows Q-W. 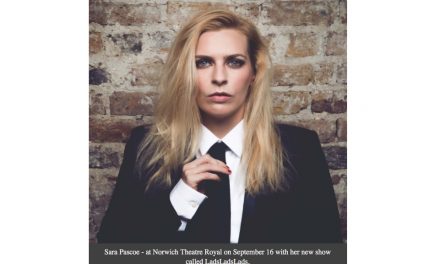